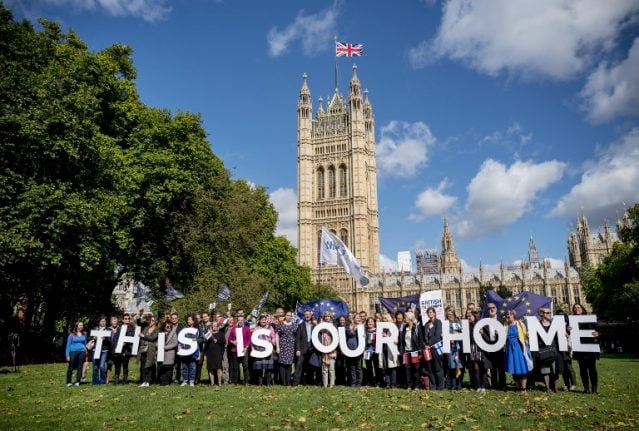 Despite the shock and uncertainty caused by the Brexit referendum result the majority of the French population in the UK, estimated to be between 250, 000 and 300,000, are staying put in their adopted home.

However some, who crossed the Channel for a new life, are ready to pack up and head home. But the move is likely to a traumatic one. Regret about leaving their adopted home in the UK mixed with a fear of moving back to a France some no longer consider their home is daunting.

Some French expats in the UK, like their British counterparts in France are crossing their fingers that Brexit might just not happen, while others are waiting to see how the negotiations between London and Brussels will pan out.

Even this week the British government's claim that a deal on EU citizen rights is within touching distance, was rubbished by the EU parliament.

For 33-year-old Alice Leclercq, who is originally from the city of Le Mans, waiting until a deal is finally done is not an option. The process safety engineer who lives in the Peak District, northern England with her British partner, said her plan to eventually return to France has been accelerated by the result of the 2015 EU referendum, not least because of the rise in xenophobic abuse that followed.

Since the Brexit referendum, Leclercq said she found people were being “more openly racist” and told The Local she had been called a “surrender monkey” and a “bastard frog”.

“People have felt more entitled to say these sorts of things. Even people I knew and I thought were friends were empowered by the Brexit vote to say things they would have never said before,” she said.

She is not the only French national to suffer insults.

France's former ambassador to the UK Sylvie Bermann said in October last year that her French compatriots had witnessed a rise in abuse after Brexit.

The ambassador told a parliamentary committee how the French now viewed Britain differently, how they had gone from feeling like Londoners to foreigners overnight and how some were planning to leave.

“They were not used to this sort of abuse in a country where many have lived for decades,” Bermann said.

But for Leclerq it's not just the abuse that has tarnished life in the UK. Since the referendum she says certain bureaucratic tasks have become complicated and blames Brexit..

She says her bank had refused her a new credit card despite a good credit rating history, adding that other EU friends living in the UK had been through similar difficulties with their banks after the referendum.

Her recent experiences made her feel “ostracised” in a country where she has lived for a decade.

“I don’t feel welcome in this country anymore. They are happy for me to work and pay taxes here but it feels like they do not want me to exist,” she said. 'There is no such thing as home anymore'

Leclercq is now actively looking for work in France but she admits the move is “scary”.

“There is no such thing as home anymore because home is here and nowhere is home in France,” she said, adding she felt culturally “disconnected” from her country of birth.

“My partner is British and I am French, what does this mean for us. Can he come to France? Can I stay here? I am extremely anxious because I feel very trapped. For the first time, I don’t have control over my life,” she said.

She is not the only French expat fearing a return to France.

Valérie Ferretti has lived in the UK for 20 years. She left the south of France and her village of Salernes in the Haut Var as a 21-year-old student to do a year in the UK under the Erasmus programme and she stayed.

Now the 41-year-old mother of one is also ready to move back to France.

Ferretti said life took a turn for the worse after the referendum and also cited a “rise in racism”.

“I always thought the UK was an open and multicultural country but since the vote I have discovered new images of a place I may have once idealised,” she told The Local.

“For me London was a really interesting city with plenty of opportunities but today there are less opportunities and it’s like everything is falling apart,” she added.

Ferretti described a “toxic” atmosphere in which pernicious comments were made against immigrants.

Working in recruitment in the charity sector, Ferrati noticed “more remarks were made on people’s accents” and that employing EU nationals was increasingly seen as “riskier”.

And she is not the only one to feel a sense of discrimination against EU nationals. In September, it was revealed the UK Government was investigating growing evidence that EU nationals were being illegally prevented from renting or buying properties, getting jobs and booking holidays.

But moving country is not easy. Ferretti said the reason she had not already left the UK was down to logistics and “fear”.

The mother of a four-year-old son, she said the situation is complicated by the fact her partner is British and speaks little French and the couple bought a house in the south London area of Norwood.

“I am scared of going back,” she said. “I am no longer at home in France, London is my home. Going back to France would be like starting everything again from scratch.”

And yet, Ferretti said she did not want her son to grow up in an environment where he may feel ashamed of speaking French and “give up on where he is from”.

“I wanted him to be brought up in a place where he could be open to the world,” she added.

While many EU nationals settled in the UK have been left with struggling sentiments around their identity, Ferretti said she was most disappointed “by the huge inertia” of people opposed to Brexit in the UK “who do nothing about it”.

Hanging on to the hope that Brexit may be reversed, Ferretti keeps delaying her decision to leave. 'Those with the biggest bond feel rejected'

The experiences shared by Ferretti and Leclercq are not uncommon.

Maike Bohn, a founding member of the campaigning group “The 3 Million” which works to protect EU nationals’ rights following Brexit, told The Local EU nationals keen to leave “were those who have created the deepest bond with the UK” and now felt “rejected” by the referendum result.

“People who are thinking about leaving the UK are the ones who love this country the most and believed they had shared values,” she said.

Bohn added that a mass exodus from the UK to the EU had yet to be seen but that many French nationals felt “disenchanted and disconnected with the UK”.

“Many people are still waiting to see what will happen but the emotional turmoil that people are going though cannot be ignored,” she said.