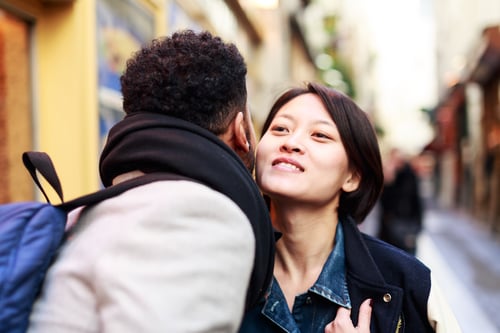 Photo: Young Adults Kissing in the Streets of Paris/Depositphotos
When we think of the French we think of kissing.
Not really the tongue twisting “French kissing” (which isn't actually very French) but the common cheek kisses used to to greet people, known as “la bise”.
This tradition, which normally involves planting an air kiss on each cheek (sometimes up to four times depending on where in France you are) while making a kissing noise has been the subject of so many conversations and articles and viral YouTube videos.
That's partly because it can be a deceptively mind-boggling custom for foreigners to get their heads (or cheeks) around.
But where does the tradition actually come from?
What did the Romans do for us?
It was the Romans who popularised this (for some) pesky tradition, spreading it throughout Europe and North Africa as their empire grew.
They had several words to describe the act of kissing, including saevium for a loving kiss and osculum for a friendly or religious kiss.
But it's basium, used for a kiss signifying courtesy or politeness, which is at the root of today's “la bise”, according to French author Xavier Fauche, who has written a book on the subject.
However while the responsibility might rest with the Romans, “la bise” certainly hasn't remained a stalwart of French culture since then.
In fact, during the 14th century people stopped doing it altogether as a result of the plague and it didn't make a reappearance until after the First World War.
Apparently it was the bourgeoisie who were most resistant to “la bise” because they believed it to be common, an opinion which lasted well into the mid-20th century.
But today all French people have welcomed “la bise” with open arms.
READ ALSO: Photo: AFP
Giving a warm welcome
And according to experts, there are other reasons aside from history for why the traditional greeting kiss lives on in French culture.
Anthropologist David Le Breton said that “la bise” gives adults a rare and important opportunity to touch the face of another person.
“Children are the subject of countless kisses from everyone,” Breton told l'Express. “This isn't the case in adulthood. The kiss is therefore an opportunity to show affection, friendship or respect, which involves a certain degree of closeness.”
For Dominique Picard, an author on social behaviour the popularity of the custom is all to do with French people enjoying a bit of human contact.
“You can separate cultures into two groups,” said Picard. “Contact cultures and non-contact cultures. And France is certainly a contact culture.”
Anyone who has been to a French party and spent the first ten minutes giving “la bise” to everyone will certainly concur with that.
“Part of our traditional values is being welcoming and sociable and this is extremely important to us,” Picard added.
But like most traditions its significance and the way in which it is done has changed over time and one of the biggest changes, according to the experts, is men kissing men.
“This is part of post-'68 culture,” said Picard, adding that it was very much part of the hippy movement.
Philosopher and author of “The Kiss: First Lessons in Love” Gérald Cahen also speaks of kissing between men as a modern affair.
“Until recently, it would not have occurred to me to kiss my friends,” Cahen told Le Parisien. “Today, women still respect the kiss more than men, but the practice has become a tradition for the majority of French people.
“For foreigners who visit France, the bise can annoy them, even shock them, because they are not used to it,” he added.
While some get annoyed or confused, others such as UK comedian Paul Taylor just ridicule the custom, much to the hilarity of the French themselves who enjoyed watching this video. But why do people in some French regions give more “bises” than others?
While the Romans might be to blame for starting the whole cheek kissing custom off and the French love of human contact can explain why it persists, how do we explain why the number of “bises” differs depending on where you are in France (see map below)?
READ ALSO: Bretons fight fo the right to give just one greeting kiss Map: Le Parisien
“I don't think we can know why we do so many kisses in one place and a different number in another,” said Picard.
“Traditions are sometimes different from village to village. They are rooted in regional cultures, and what this proves is that it is a very old phenomenon,” Picard added.
Others have speculated that the difference is due to those in some regions believing that two kisses, as is commonly given in Paris, is a somewhat cold greeting.
In an attempt to distance themselves from those in the capital and make their part of the country feel warmer they have pushed for four kisses. This however is just one theory.
If all this has left you confused as to do what to do Picard says: “In any situation, just do what everyone else does.”