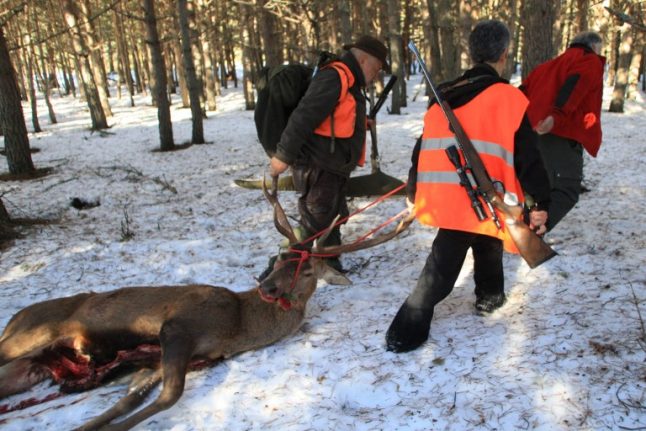 The incident occurred around 10am (0900 GMT) in the Compiegne forest, about 85 kilometres (53 miles) northeast of Paris.

The man was acting as a beater, who normally help corner the animal in a certain area, when he was struck.

He “was charged and pierced by a deer which stabbed him with his antlers,” a police spokesman said. The hunter, who was not carrying a rifle, died of internal bleeding before emergency services could arrive. Police said this type of death was “uncommon”.

Guy Harlé, the president of the local hunters federation said: “Normally the animal would flee, but this time he decided to charge. It came after him.

“The antlers of the stag are like many knives piercing you, there is nothing you can do. This tragic accident reminds us that we do not play with a wild animal. There is an inherent risk with hunting,” said Harlé.

The victim was named as Regis Levasseur. He was due to get married in the coming months.

“For him, hunting was more than a hobby, it was his life,” said Harlé.

The killing of the hunter by a deer comes just a week after there was an outcry in France after hunters and their hounds tracked a stag to the garden of a private house before shooting it at close range (see video below).

The incident took place in the town of Lacroix-Saint-Ouen, on the edge of the Compiegne forest, not far from where Regis Lavasseur was gored.

It prompted France's environment minister, Nicolas Hulot, to slam hunting with hounds as “a practice from another century” that “prolongs the agony” of the animal. Animal rights groups launched petitions calling for hunting to be banned and protests were held in nearby towns. The hunting group involved in the incident was banned for a month and the hunter who shot the deer was subject to death threats.

For Harlé from the hunters federation the fatal goring of his fellow hunter was an answer to those who had criticized those who had shot the stag.

“Here we have the painful illustration of the danger that a wild animal can represent,” he said.

“What would have happened at Lacroix-Saint-Ouen if the stag had charged around the neighborhood? This should serve as a lesson.”

There was less sympathy for that argument on Twitter where many linked the two incidents together with the hashtag “#karma”.

The death of the hunter in Compiegne comes after several tragic accidents since the start of the season in September when hunters have accidentally shot each other.

In one incident a grandfather killed his own grandson during a hunt in the Vendée, western France. And last month a woman was shot dead in her garden after a bullet from a hunter's gun passed through her garden hedge.

Although it is rare for someone not involved in the hunt to be killed it does happen, with walkers, mushroom pickers and even motorists killed by stray bullets in recent years.

France's national hunting office insist that the majority of accidents are carried out by people not respecting the rules of the hunt.

According to La Depeche newspaper 27 percent of hunting accidents in France are due to mishandling of the firearm and 17 percent due to hunters firing off bullets without having identified a definite target.

Last year 18 people were killed in hunting accidents in France and 351 have been killed since 2001, but most of the victims were involved in the hunt.