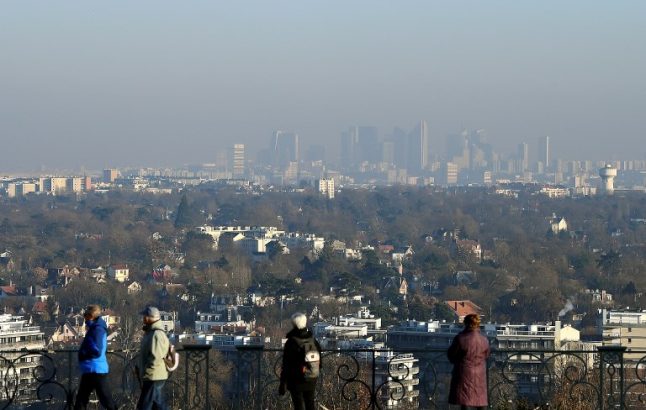 Looking into Paris from the suburb of Saint-Germain-en-Laye. Photo: AFP

Some Parisians adopt the same view Londoners have towards the UK beyond the M25 – if you live inside the Périphérique you rarely venture out. And some might say, why would you need to?

Arguably Paris has everything you could possibly need from the point of view of amenities and entertainment, green spaces, architecture, and culture.

A lot of Parisians don’t have a car, and so they are only able to get around by public transport and on foot. What is beyond the Périphérique (the ring road around the city) is one thing, but a whole other concept is what lies beyond this, and further than the end of the RER train lines.

That is where I chose to live with my young family. A picturesque, and well manicured, large village called Orgeval, in the Western suburbs of Paris.

It is located beyond the RER A (about 15 minutes driving from the stylish town of Saint-Germain-en-Laye, and 10 minutes drive from Poissy).

I still consider that I live in “Paris”, even though it is strictly the Ile-de-France region. It takes us half an hour to drive from Orgeval to the Arc de Triomphe.

We do so via the A14 toll road which, whilst expensive, is almost always swift and with little traffic. Some of my friends living in Paris (within the Périphérique) would say that it takes them pretty much half an hour to travel to most places within Paris anyway.

I can get the train (the Transilien J line) from Villennes-sur-Seine (our closest) or the RER A. Both take about the same length of time (25 minutes into Saint Lazare). Where we chose to live doesn’t have a train station, so I do have to drive to get to this. It would be better if we had one in walking distance, but it’s not too much of a bother. And the benefits that we get living where we do, I think, are immeasurable.

Paris as a city is densely populated and the apartments are small. Whilst there are parks, and they are lovely, there are many that are really for adults to stroll around and enjoy (you’re not allowed on the grass). And whilst there are often play areas, they are almost always busy, and – in my experience – not always as good (especially for little ones) as the ones out in the suburbs.

Paris does have traditional carousels a-plenty though – much to the delight of my children. We keep these as a special treat for when we venture into the city.

Being half an hour out of Paris has significant perks. We have a big house, and a very big garden.

READ ALSO: Seven suburbs around Paris you could potentially move to We don’t ever really need to go to the park as we are lucky to have so much space AND our own swing and slide set. But if we do, in every little town or village around us (including ours) there are play parks and areas for children, with equipment and space of the likes I don’t see in Paris.

And on the edge of Orgeval, where we live, there is even woodland that the children (and I) love. As well as many other woodland options around Saint Germain-en-Laye, Feucherolles, and Saint-Nom-la Breteche, to name but a few of our favourites.

Yes I have to drive everywhere in the car, but we have so many wonderful things to do and places to visit within a short distance, especially with children.

On wet weather days there are numerous soft play centres around the suburbs. My Paris based friends often say a limitation of being in the city is that there simply isn’t the space for proper big soft plays there.

Even breathing the air is different just outside of the city. It is fresher.

There is also a big English speaking expat community in the Western suburbs.

READ ALSO: Why would you live in Paris when you can live in the banlieues? But even if you don’t have school age children (we don’t) it doesn’t matter. You won’t feel isolated as there are so many groups and links that you can very easily tap into these friendly and welcoming communities.

And the sometimes negative reputation that Parisians have for being unfriendly, doesn’t seem to apply once you are out of the city.

Everyone that I have come across where we live and in the surrounding suburbs has been accommodating and helpful, and in our three years here we really feel part of the local French community too.

If we travel towards Paris we have everything that a big capital city has to offer. If we travel in the opposite direction, we are engulfed by beautiful French countryside, tree lined avenues, picturesque villages and open space.

It is honestly the very best of both worlds.

So Parisians in Paris, with young families wishing for space – consider venturing outside of the city.

And if you are thinking of moving to Paris with a family – look to the suburbs. You would not regret it at all. Kate Redfern is the creator of the website www.fivelittlestars.com