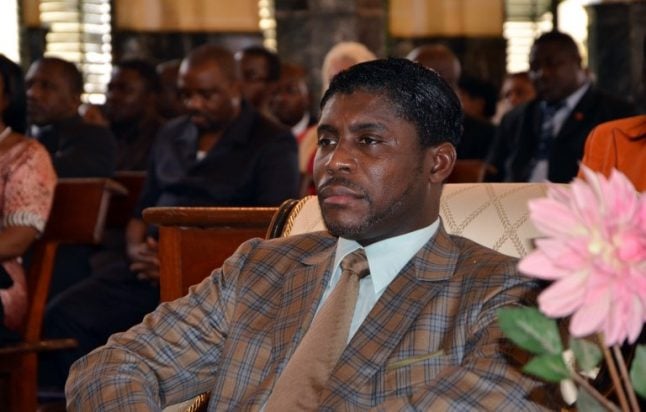 A 2013 photo of Teodorin Nguema Obiang (R), the son of Equatorial Guinea's president Teodoro Obiang. Photo: Jerome Leroy/AFP
The 48-year-old vice president of the small west African state, tried in absentia, was also given a suspended fine of €30 million ($35 million) by judges for money laundering, corruption and abuse of trust in last week's verdict.
The case, which was sparked by two anti-corruption NGOs, is the first of three involving families of African leaders, which campaigners hope signals a new willingness of French authorities to tackle money laundering.
Obiang's lawyer Emmanuel Marsigny announced the decision to appeal the verdict.
Paris has long been a favoured destination for the ill-gotten gains of wealthy figures linked to political leaders in Africa, particularly in France's former colonies.
Obiang is estimated to have used France to launder €150 million in misappropriated funds. During his three-week trial in June and July, the court heard about the fortune and playboy Parisian lifestyle of Obiang, who is the son of Equatorial Guinea's president of 38 years, Teodoro Obiang Nguema.
He was accused of spending more than 1,000 times his official annual salary on a six-storey mansion in a posh part of the French capital, a fleet of fast cars and artworks, among other assets.
The Paris court ruled that his €107 million mansion near the Champs-Elysees avenue — which boasts a hammam, a disco and gold-plated taps — should be confiscated, along with other assets.