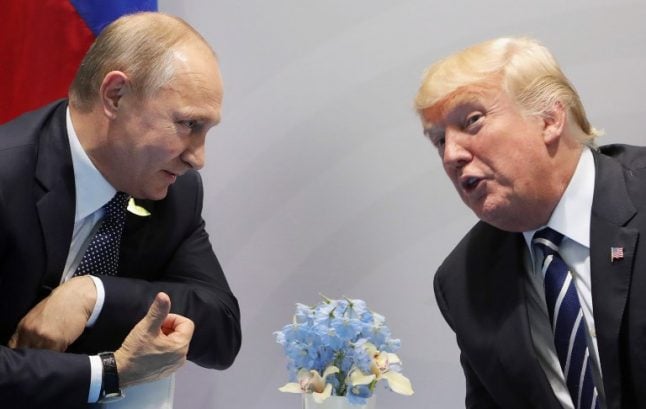 The survey measured Europeans’ opinions of world leaders and was carried out by Odoxa-Dentsu Consulting on behalf of France Info and Le Figaro.

While 86 percent of Europeans were found to have a negative opinion of Trump, some 90 percent of the French said the same thing.

This marked a nine-point increase from the same study that was carried out in January.

Some 87 percent found Trump to be more aggressive now than he was at the start of the year, while 81 percent said they found him to be dangerous and racist.

Meanwhile, just 14 percent of respondents in France said they considered Trump to be “competent”.

However it wasn't all bad news for the US president with a third of French people saying they found him to be charismatic, while 42 percent said they thought he was “dynamic”.

The French have had many reasons to be angered by Trump, not least after he suggested that the string of terror attacks the country has suffered was the “country's own fault”, as well as bemoaning the fact that “France was no longer France”.
Trump's criticism of Paris and France's immigration policies prompted anger by the city's mayor Anne Hidalgo, who called Trump “unfriendly” and the then President Francois Hollande, who hit back saying: “It is never good to show the slightest mistrust towards a friendly country.”
Indeed, this week's survey found that the French rank Trump even lower than other leaders, with 75 percent saying they had a negative opinion of Russian president Vladimir Putin.
Perhaps unsurprisingly, just 32 percent had a negative view of German Chancellor Angela Merkel.

On the home front, the survey found that 56 percent of French people had an unfavourable opinion of French president Emmanuel Macron.

Macron's popularity has repeatedly taken hits since he became president in May. In October, he was accused of being arrogant and “a president of the rich“, after comments he made about France's working class.