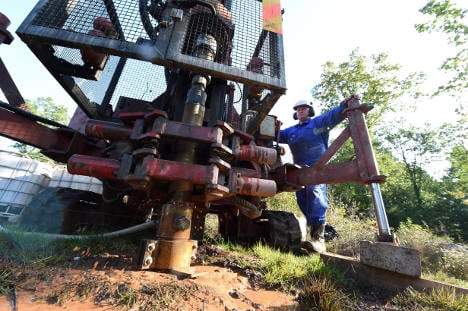 A worker stands next to a drilling machine used to collect sample of rocks extracted from the original base of the meteorite impact crater. Photo: Mehdi Fedouach/AFP

That's because Rochechouart, population 3,800, and its medieval castle are built on top of an astrobleme.

“An astrobleme – which literally means 'star scar' – is the name given to traces left by a major meteorite impact,” explained Philippe Lambert, one of the astrogeologists trying to unlock its secrets.

This particular impact crater was made by a massive space rock that crash-landed more than 200 million years ago, and has intrigued scientists since its discovery in the 19th-century.

“You have a nugget under your feet!,” the famous Canadian astrophysicist Hubert Reeves enthused in 2011 while visiting the research project he helped launch.

Since then, scores of scientists – geologists, paleontologists, exobiologists – from a dozen countries have submitted requests to examine the space rock up close.

Lambert – who devoted his 1977 doctoral thesis to France's only known astrobleme – today directs the International Center for Research on Impacts at Rochechouart (CIRRI).

The centre is coordinating the first-ever drilling and excavation at the site.

“About 200 million years ago – before the Jurassic period, and even before the planet's continents split apart — a six-billion-tonne meteorite about a kilometre in diameter crashed here,” said Pierre Poupart, who overseas a natural reserve set up around the crater.

The impact – which vaporised the meteorite – was roughly equivalent to several thousand Hiroshima-sized atomic bombs, and almost certainly destroyed all life within a radius of some 200 kilometres (125 miles). The landscape was changed forever.

The Rochechouart astrobleme is unusually close to the surface, making it easier to study.

“We are walking on it,” said Lambert. “We don't even have to dig through a layer of dirt to reach it.”

The drilling, scheduled through November, will yield 20 core samples taken one to 120 metres below the surface from eight different sites across a 50-hectare area.

“There's everything here to justify an open-air laboratory,” he mused.

Some scientists hope to tease out remaining mysteries about how such meteorites form, and what that might tell us about their evolution in space.

Others are on the hunt for chemical traces that could shed light on the emergence of life on Earth, and which of the raw ingredients essential for life came from space.

Geologists are curious about how such a cataclysmic impact might have released water held within rock formations, while palaeobiologists are looking at how an event that could massively destroy life also, at the same time, creates conditions for new lifeforms to emerge.

“This doesn't mean that the secret of life is under our feet,” said Poupart. “But studying what happened here 200 million years ago could tell us a lot.”

Once they are secured, tagged and archived, the Rochechouart rock cores will be made available to researchers around the world, he said.

“We would like to see this site become a natural laboratory benefiting national and international research,” France's National Centre of Scientific Research said in a statement.