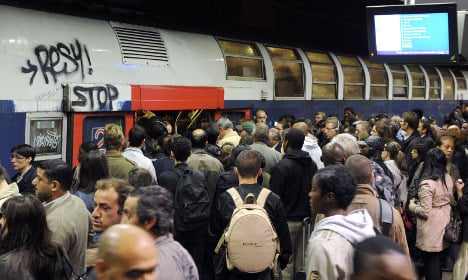 Services on the RER A were first suspended between Auber in the centre of the city and the finance district of La Defense on Monday afternoon.

A major leak provoked a mudslide in a tunnel forcing the suspension of Europe's busiest commuter line at its busiest point.

Trains were running on the rest of the line but services were suffering severe disruption. RER A chiefs said all hands were on deck to clear the tracks and open up the central section of the line, but did not give any time from for a return to normal.

Later on Tuesday transport authorities said they hoped services would be running as normal again on Wednesday morning. Paris transport chiefs have put on extra Metro services on lines 2, 6, 9 and 14 as well as buses between La Defense and Charles de Gaulle Etoile.

Some 120 staff were on hand to help passengers, who were advised to avoid travelling if possible.

The fact the closure of the central section of the line took place in the school holidays meant there was less travel chaos than would have been the case normally, but nevertheless with one million passengers travelling daily on the RER A the tunnel closure provoked travel misery for many commuters.

The mudslide which covered the tracks occurred in a tunnel where upgrade works were taking place to try to relieve pressure on the overcharged RER A services.

READ ALSO: The strange rules of riding the Paris Metro you didn't know about