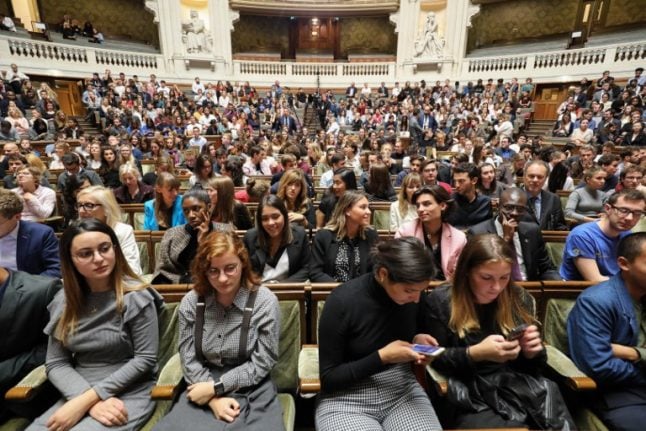 Photo: AFP
French Prime Minister Edouard Philippe, Minister for Higher Education Frédérique Vidal and Minister of National Education Jean-Michel Blanquer announced on Monday a series of changes that will affect students hoping to go to university in France.
The changes include a step towards academic selection, long seen as a taboo issue in a country of “education for all”.
French high school graduates are guaranteed a public university place regardless of their grades, which along with negligible tuition fees has long been held up as an egalitarian policy.
Despite a failure rate of nearly 60 percent among first-year students, previous attempts to introduce academic selection have failed under opposition from student groups.
As well as the reforms, the government announced it will be investing nearly a billion euros in higher education in the next five years.
These are the measures set to be introduced from autumn 2018:
Selecting candidates
For oversubscribed university programmes, the French currently use a lucky draw system to select who will be admitted on to courses.
But from autumn 2018, the controversial system is getting a overhaul in the shape of granting universities access to school records and student transcripts.
READ ALSO:

However the French Prime Minister was quick to say this would not mean a rigorous selection process.
“I'm not and have never been afraid of the word 'selection', but that's not what we want for French students. The goal is not for universities to say no,” said Édouard Philippe.
“There are many options that fall between the brutality of a selection process and the lucky draw that are much more flexible, more humane and smarter,” he added.
But for heavily oversubscribed courses, universities will be allowed to give priority to students “whose profile, motivation and plans” are the best match, Philippe said.
Universities will have the opportunity to give three responses to applications: “accepted”, “conditionally accepted” or “refused”.
However they will only be able to refuse students in situations where courses are oversubscribed.
France's 70-odd universities are vastly underfunded compared to its prestigious “grandes ecoles”, selective higher education institutes which tend to attract the best students.
Social security
The student specific social security scheme will become part of the general social security scheme, said Vidal on Monday.
“Our social security system is not working well. We will remove the fee that students pay and we will transfer it to the general scheme,” she said.
University applications
High school students will not longer have to state the courses they are applying for in order of preference.
And the number of applications they can make has been reduced from 24 to ten.
READ ALSO: More places
With certain areas of study particularly oversubscribed and the government anticipating 200,000 additional students over the next five years, it aims to create 130,000 additional places over the next five-year period.
It is also aiming to target the problem by promoting some of the courses that aren't as well known because, according to Frédérique Vidal, more than 137,000 places are left empty every year.
Schools
The government wants schools to provide better guidance for students in the process of choosing their courses, reported Le Parisien.
“At the end of the final year of school, teachers will give an opinion on each students' choice of courses. This will appear in their file and will be sent to the universities concerned,” reported the daily.
Refresher courses
One of the main reasons behind the changes is that the French government is keen to battles the high failure rate for first year university students.
In a bid to put an end to this, students who have been “conditionally accepted” will be asked to attend refresher courses to help get them up to scratch.
Students will also be able to choose to do a gap year or “preparatory year” before starting their higher education.
During this period, they will benefit from student status.