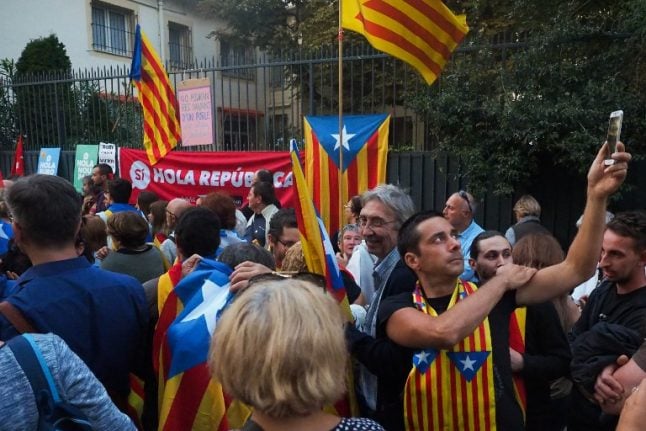 Photo: AFP
On Wednesday evening, independence sympathisers packed a hall in Perpignan — a city with deep Catalan roots situated 30 kilometres (19 miles) from the border — to discuss how to assist the “southern Catalans”, as they call residents of the Spanish region.
“It's bad what's going on the other side of the border. We have to show solidarity. We're one and the same people,” Laura Py, 28, who attended the gathering of about 150 people, told AFP.
France's Pyrenees-Orientales area was for centuries a part of Catalonia, only becoming French in the latter half of the 17th century.
Many of the Spanish Republicans that fled to the region during the long dictatorship of General Francisco Franco were Catalan.
READ ALSO: Photo: AFP
On Wednesday, associations from across the French Catalan heartland came together to organise support for those they see as victims of a new Spanish crackdown.
Opening the meeting in the local Catalan cultural centre, the head of the French wing of Catalan pro-independence group ANC, Herve Pi, condemned the detention of two high-profile separatist leaders.
ANC chief Jordi Sanchez and Jordi Cuixart, the head of Omnium Cultural, were detained last week on sedition charges, triggering mass demonstrations in Barcelona.
In Perpignan, around 500 people held a protest outside the Spanish consulate over their jailing.
“This repression will continue,” Pi told Wednesday's gathering in Catalan, with the separatist flag — yellow and red with a star — hanging on a wall at his back.
Listing the various ways in which the “northern Catalans” could show solidarity, he urged them to defend the separatists' cause with their friends, neighbours, MPs and in the French media.
Pi also announced the launch of a “resistance fund” to help Catalan “political prisoners” and their families.
Pierre Manzanares of Omnium Cultural — a French group which is separate from that across the border — said the money raised would also go towards Catalan associations that have had their accounts blocked by the Spanish government.
'Mass exodus' unlikely
Several people reached for their chequebooks to donate 30 euros ($27) in membership fees.
Among them was Joana Serra, owner of a Catalan bookshop in Perpignan who said she had been inundated with questions from customers asking “what they can do for southern Catalonia”.
On Monday, the Unitat Catalana group — which seeks more recognition for French Catalans — proposed that the Spanish region's president Carles Puigdemont lead a government-in-exile from Perpignan if, as Madrid is threatening, he is deposed.
Andre Laurent, a retired army colonel attending Wednesday's meeting whose mother was born in Catalonia, said he was ready to open his home to fleeing separatists “if things take a turn for the worse”.
His sentiments were echoed by Gautier, a far-left activist who has been to Barcelona to take part in separatist demonstrations.
The bearded, bespectacled 29-year-old said he was ready to offer financial, logistical and “whatever other kind of aid the comrades on the other side might need”.
But Pi said there were no plans yet in place for hosting possible exiles.
“We don't think it will come to that, but we would be ready to do it,” he said.
Manzanares agreed that, while members of the Catalan government removed from their posts by Madrid “might have to leave”, it was unlikely there would be a “mass exodus”.
Url copied to clipboard!