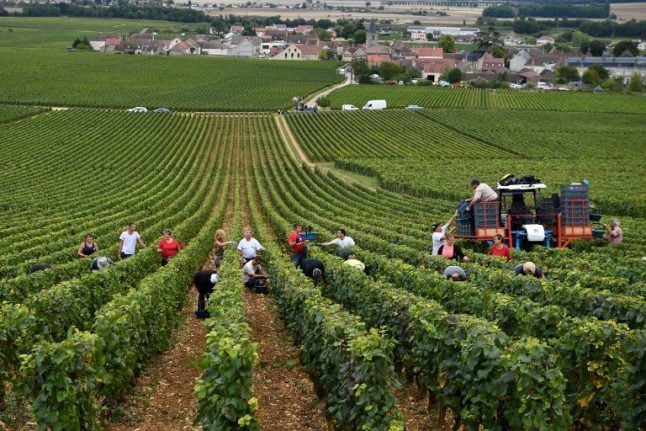 Bad weather this year has already prompted a steep drop in French wine output, contributing to a 50-year low in global production.

And Europe-wide curbs on glyphosate, which the European Parliament wants to see banned by 2022, would be a further headache for many French vintners.

In the event of an outright ban, Bordeaux grower Olivier de Marcillac said he would have to “work the land at least four times a year, meaning more equipment, more manpower”.

Yet as anger grows over its use — with 1.3 million Europeans signing a petition against it — he grudgingly admitted a ban would probably “be a good thing”.

Despite worries over his production costs going up, de Marcillac is already resigned to cutting his use of chemicals — two rounds of treatment a year,
lowering the dose by 25 percent.

The European Commission has suggested a five-year licence for glyphosate, instead of the usual seven, but postponed a vote on the issue Wednesday.

Under blue skies at de Marcillac's chateau in Gardegan-et-Tourtirac, a tractor prepared a field for the sowing of crops like fava beans and oats between the vine rows.

This technique is used by some 85 percent of Bordeaux winemakers to avoid soil erosion.

But under the vines themselves, a hefty majority spray glyphosate to keep the ground clear.

Weeds here could spell disaster for the precious grapes — “they're a real magnet for disease,” explained Yannick Sabate of Chateau Fontdaube in nearby Saint-Magne-de-Castillon. As an organic farmer, Sabate's brother Christian doesn't have the option of using glyphosate.

He instead has to use a special machine to go painstakingly between the rows removing weeds — a lot more complicated than spraying them with
chemicals, which is easy, quick and cheap.

Growers opting for the non-chemical method also need to have training and find qualified manpower, which is lacking in the region.

The arduous process needs to be done four to six times a year, compared to just two or three for weedkiller.

It takes three times longer and can cause subsidence in the land. Plus, the diesel needed for the machine adds to costs, along with wear and tear to the equipment.

Even with local government subsidies, not everyone can afford it.

“We do it, but it's a luxury that we allow ourselves in order to increase the value of our wine,” says Yann Todeschini, who runs two chateaux in the region.

Todeschini and his brother decided in 2009 to give up chemicals — to the great displeasure of their grandfather, who was “ashamed to see his vines
dirtied” with weeds, and worried about the economic impact.

“We had a drop in yields at the beginning — we got it back three to five years later with vines that were more balanced thanks to better soil quality,” said the young winemaker.