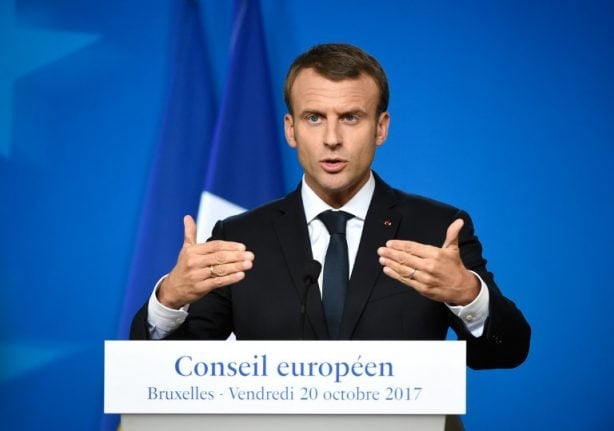 At a meeting in Luxembourg, labour ministers from the 28-member bloc approved changes to the posted workers directive, an arcane piece of legislation dating from 1996 that has become a lightning rod for anti-EU sentiment in France.

It allows companies to send workers to other EU members without paying local social changes, but the loophole is seen as enabling companies to unfairly import cheap labour from eastern Europe into France and other wealthier members.

Macron has been the driving force behind the reform since his election in May despite sometimes fierce objections led by nationalist governments in Poland and Hungary.

“It's a vital step to recreate confidence in Europe,” a statement from his office said late Monday, while French Labour Minister Muriel Penicaud called it a “victory for Europe” after the marathon negotiations.

But it was achieved at a cost: Poland, Hungary, Latvia and Lithuania all voted against the change, seeing their economic interests challenged, and there were last-minute concessions.

Paris had originally wanted workers to be “posted” — meaning sent to a foreign country to work — for a maximum of 12 months and for the transport sector to be covered by the directive.

The final deal sets 12 months as the baseline, but this can be extended at the employer's request for six months, and trucking companies have been exempted pending new legislation covering the transport sector.

“I believe we have found a balanced compromise,” said Estonia's minister Jevgeni Ossinovski, who chaired the 11 hours of talks as his country currently holds the rotating EU presidency.

“We have very strong support for the agreement that was reached,” Ossinovski told a final press conference in Luxembourg.

The 39-year-old French president was elected in May with a boldly pro-EU programme in the face of rising euroscepticism in France and the growing strength of the far-right National Front.

Reforming the posted workers directive was the first part of what he termed his “protective Europe” agenda to make the EU more of a shield against globalisation for the bloc's 500 million citizens.

But it was largely symbolic: France received less than 200,000 posted workers in 2015, according to EU figures, though fraud is also thought to be widespread in the system.

Other strands of the “protective Europe” agenda include measures to screen foreign investments — particularly Chinese ones — in strategic sectors of the European economy, and policies to force governments to buy more from EU manufacturers.

Some countries, particularly the Netherlands, Sweden and Denmark, fear the programme is a cover for French protectionism, but Macron insists he wants to balance openness with a battle against unfair competition.

“It's an undeniable victory for Emmanuel Macron. His first at the European Union level,” said the left-leaning Le Monde newspaper in its report on Tuesday about the posted workers deal.

Government spokesman Christophe Castaner saw the compromise as a victory for Macron's negotiating method which saw him win over some eastern European states including the Czech Republic, Slovakia, Romania and Bulgaria.

Relations with the rightwing and nationalist governments in Hungary and Poland, which Macron once accused of treating the EU like a “supermarket”, have been strained further however.

“It's not about one country forcing it through,” Castaner said on the Public Senat channel on Monday.

In France, far-right leader Marine Le Pen called the deal a “completely cosmetic reform that is a PR exercise aimed at showing that that European Union is able to reform itself.”