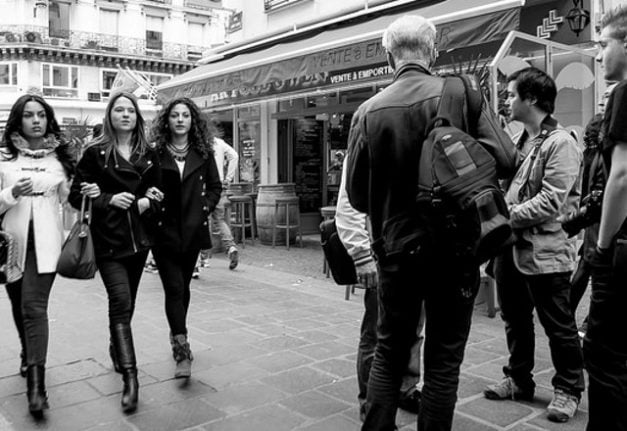 Photo: Jean Francois Gornet/Flickr
“During one packed Metro journey a man pressed up against me and placed his erect penis between my buttocks,” Madeleine La Salle, a 30-year-old Parisian woman told The Local.
“I was so scared, I was shaking. I didn't know what to do,” she said.
Her tale, though shocking, is not unique of course as the video of 22-year-old Marie Laguerre being hit hard in the face by a man who had been “making dirty noises, comments and whistling” in her direction, which has gone viral in France, has made clear.
Sexual harassment is an issue that has been much talked about in France, and indeed around the world, since the Harvey Weinstein sex scandal which hit Hollywood in October, after which Parisian women told The Local about their experiences of sexual harassment on the streets of the French capital.
They also discussed their views on the new law which is being introduced to impose on-the-spot fines for sexual harassment of women on the streets.
The legislation was piloted by 34-year-old Marlene Schiappa, a feminist and early supporter of French President Emmanuel Macron, who said on Monday that the first fines linked to this law would probably be imposed in the autumn.
Schiappa, asked about the difficulty of drawing a line between street harassment and flirtation, cited examples such as when a man invades a woman's personal space — “by talking to you 10, 20 centimetres from your face” — or follows a victim for several blocks, or “asks for your number 17 times.”
READ ALSO: But not everyone is sure the aim to stop street harassment is a realistic one.
“I think the new law is a lovely idea, but how can you really apply it? Emeline Augris, a 40-year-old Parisian woman told The Local.
“I think this situation is something that will need to change over time with education,” she said. “On the other hand, it's good to recognise that it's an issue and ban it. Every adult woman and some younger females have a story like this.”
'It always happens when the train is busy'
Like La Salle, Augris has also experienced problems on the Metro.
“I think the biggest problems are on the Metro. It always happens that when the train gets busy, men will seize the moment to touch you.
“That's happened to me several times and when it's happening you can't tell who it is. It's so cowardly,” she added.
Rosalie Comier, who did not want to give her age, agreed that the Metro was a big problem. “I've been called names by men on the Metro and 'complimented' in that way that doesn't really feel like a compliment because it comes across in an intimidating way.
“They sometimes tailor what they say to me too because I'm black which embarrasses me in public.
“One of my friends was once propositioned for sex on the Metro and when she said 'no' the man tried to follow her home. These stories are so common.”
And these victims aren't alone in feeling like public transport poses a threat. According to a study conducted in 2016, one in two women in France said they will choose trousers over a skirt to avoid becoming the victim of sexual harassment on public transport.

And a 2015 survey of women commuters around Paris revealed that 100 percent of respondents said they had been a victim of sexual harassment.

Terrifying experiences
Another Parisian woman, Marie Lefebvre, 29, had a “terrifying experience” when she was on her way home after a night out.
“I was walking down my street and I felt like the man behind me was following me.
“I started running home because it wasn't that far and he started running too. I tapped in the code to my apartment building as quickly as I could and as I slammed the door he put his hand through the letterbox.” Women's rights demonstration, Toulouse. Photo: AFP
One woman, Agnès Bayou, 31, who also grew up in Paris, said she “has many stories”.
“I think the story that really traumatised me happened when I was in college. A guy came up to me and said that he would like to give me money because he'd like to give me a nice pair of shoes so that I would be thinking of him when wearing them.
“Then he asked me to excite him, so I said that I had a boyfriend, and he says he doesn't care, and asked me to explain what our favorite position was… I didn't know what to say. Then he asked me to let him touch my breasts.
“That's where I stop him, telling him no. Then I left… I still feel mad at myself because I felt so naive.”
A British woman, who has been living in Paris for six years had her own terrifying experience.
“I was in the supermarket one Sunday and I noticed a man following me around the store,”  said Lara Wainhouse, aged 31.
“I tried to make eye contact with the security guard but he didn't notice. I found a corner to hide in until I thought the man had left the shop but when I left he was outside, waiting.
“I crossed the road and he followed, then he grabbed my hair and tried to pull me towards him. I screamed at the top of my lungs 'F*** off!' and he ran away. Things like this only stopped happening to me when I was with my boyfriend, a fact I hate.”
General lack of respect
Hisako Watanabi, 46, a Japanese woman who has lived in Paris for five years, said that when she walks past groups of men in Paris she “just waits” for them to say, “Ni hao, Ni hao” (hello in Chinese) as a way of getting her attention.
“It's annoying because I feel like it's done in a mean way and that they're trying to intimidate me but also because it's not even my culture!
“I feel like men speaking to women in the streets, particularly in Paris, can be quite aggressive and I often feel like they're mocking me. Photo: Hernán Piñera/Flickr
“It's a shame because I love France and French culture and people here are generally very friendly!”
Others pointed to the general lack of respect that men show for women in the street.
“You walk by them and they proposition you in a way that, shall we say, isn't very charming?” said Severine Dos Santos, 33, “The solicitations happen fairly frequently.
“But I think that might just be one of the prices a woman has to pay for living in a big city. It's not very nice but then the more people there are somewhere, the more bad people you'll find.”
And Dos Santos thought the law would be a good thing.
“It's a great thing to address the lack of respect in society and show that people who intimidate women will be penalised but I'm not sure how easy it will be to catch someone doing it.”
But not all women have experienced the darker side of Paris.
Elise Callede, 19, said that while she had noticed looks – “probably more in Paris” than in other places she'd been, she didn't feel intimidated…yet.
“I've heard stories of how it can be in Paris but since moving here a few weeks ago to study, I haven't had any problems.”
The government hopes the new law might mean Callede's account becomes the norm rather than the exception. But many women remain doubtful that it could have an impact.
A version of this article was previously published in October 2017.