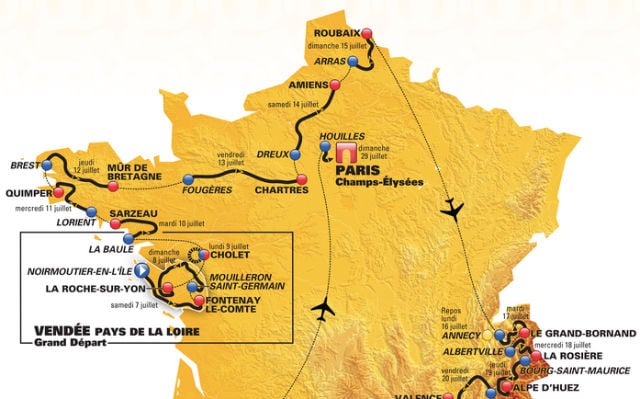 Photo: AFP
The race, which starts on the picturesque island of Noirmoutier off the Vendee coast on July 7, lacks a long, flat individual time trial where four-time winner Chris Froome often pulverises opponents.
Six mountain stages and four hilly stages are packed into the latter part of the Tour before it ends on the Champs-Elysees in Paris on July 29.
Such relentless hill and mountain terrain may well grind down Froome's protective entourage who have so successfully snuffed out attacks in recent Tours.
On top of that, teams will feature just eight riders in 2018 rather than the usual nine, leaving the Briton less protected by his Sky teammates than he has been used to.
The 2018 route for the world's most prestigious cycling race is basically split into two sections.
The first is largely flat but features a series of potentially punishing challenges.
They include a 35-kilometre (22-mile) team time trial on day three on windswept plains, then a Brittany run to the pretty seaside town of Quimper on day five featuring ten hills.
The route designers have also built in two ascents of the feared Mur de Bretagne the day after stage nine featuring a fabled cobbled road to Roubaix.
Breathless 12 days
When asked if the 2018 route would be tough for Sky captain Froome, Tour de France director Christian Prudhomme said all the riders taking part were champions.
“But the winner will need the stamina to roll through windy plains and do well in the team time-trial, he'll need to be able to resist the cobbles and have enough steam to get through all the mountains,” Prudhomme told reporters.
“I know of a few such specimens from the Netherlands and from Britain,” he joked, without naming Froome or the 2017 Giro d'Italia winner Tom Dumoulin by name.
Tour designer Thierry Gouvenou said the switch between the two sections “is perhaps the greatest challenge of this Tour”. After a rest day on which the riders fly from the north coast to Annecy, there follows three visually stunning Alpine mountain stages, four hilly stages and three Pyrenean mountain stages inside a breathless 12 days.
Many of France's great mountains will feature, such as the Alpe de Huez and the Col de Tourmalet.
But the two key mountain challenges are a brutal, uphill 31km individual time trial with gradients up to one percent, and a short 65km 17th stage featuring 38km of climbs to a summit finish at the Col de Portet, the first time it has been included in the race.
Portet is also the highest summit, at over 2,000 metres, ever to feature on a Tour de France.
Gouvenou said team strategy would be crucial.
“There's only eight riders per team so it's a real strategic decision between the rollers and the climbers.
“And there are a few other surprises hidden in there along the way,” he promised.