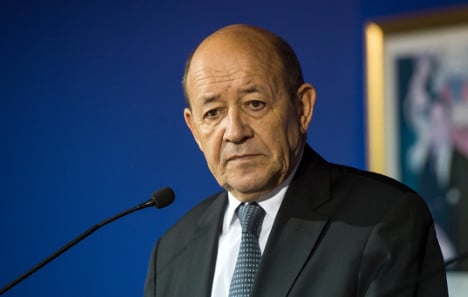 “We strongly hope that Congress, which is now responsible for a possible rupture, does not jeopardise the deal,” French Foreign Minister Jean-Yves Le Drian said in an interview with AFP.

If we denounce a deal that has been respected, it will set a dangerous precedent,” particularly in the context of negotiations with North Korea, Le Drian said, echoing other signatories of the Iran deal Britain, France, Germany, China and Russia.

On Friday, Trump ignored the advice of worried allies and kicked the fate of the landmark 2015 deal to Congress, which he told to address its “many serious flaws”.

Under the deal a number of international sanctions against Tehran were lifted in return for Iranian curbs on its uranium enrichment.

The Republican-controlled Congress will now have to decide whether to reimpose sanctions on Iran – a step that if taken would almost certainly doom the agreement.

“For us, the Vienna accord is a good accord, it limits nuclear proliferation and prevents Iran from acquiring atomic weapons. It is robust and coherent,” said Le Drian.

However he left the door open to further talks on what happens after a deadline in 2025, when certain limits on Iran's uranium enrichment are set to expire.

Washington would like to see the curbs extended in perpetuity.

“We can open a preliminary discussions with Tehran on what happens after 2025. If the treaty is respected, Iran can fully exercise its rights under the non-proliferation treaty. If safeguards or inspections are required on this date, we will start discussing them. It is also a way to avoid breaches today.

We are ready to consider these issues with the Americans,” said Le Drian, who will visit Tehran in the coming weeks.

Asked if Europeans would be willing to impose sanctions against Iran's powerful Revolutionary Guards Corps, as Trump has requested, Le Drian said “we can talk about it”.

More generally he said that recent decisions by the US – to withdraw from Unesco and the Paris climate agreement, as well as jeopardising the Iran deal – have called multilateralism into question.

“The American position today is a position of strength… of rivalry between powers and a denial of the interests of multilateralism,” he said.