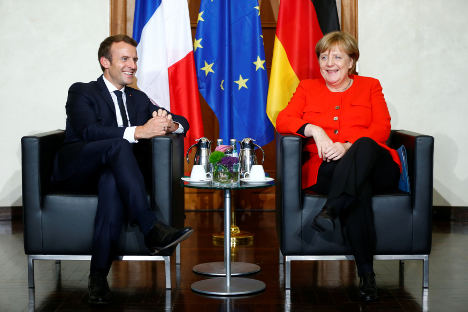 “Support for Europe is in the DNA of both the Greens and the FDP,” Macron told Spiegel weekly in an interview to be published on Saturday.

The left-leaning Greens and the pro-business Free Democratic Party (FDP) are potential coalition partners of Merkel, who was reelected last month but without a parliamentary majority.

The French president's optimism came even though the liberal FDP views Macron's proposals for a common eurozone budget and finance minister sceptically.

The FDP has signalled it will oppose any steps that will unduly burden German taxpayers.

Merkel will open the high-stakes coalition talks on Wednesday, and has so far responded cautiously to Macron's grand vision for a more closely integrated Europe.

Speaking about his nascent relationship with the German leader, Macron said he had sent his landmark speech that outlined his EU ambitions to Merkel days before delivering it at the Sorbonne university in Paris.

“After the German electoral campaign as well as on the evening of the election results, I spoke with her. She also received the text of my speech in advance,” he said.

“For me, that's in order to prevent any discussions in Germany that could have forced the chancellor to distance herself from my speech,” he told Spiegel.