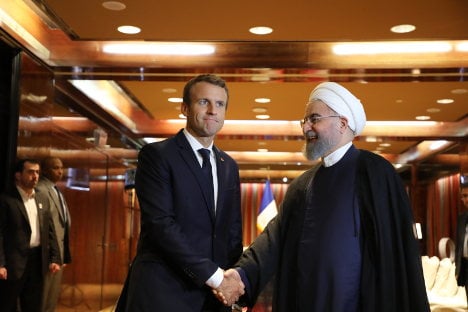 Macron told Iranian President Hassan Rouhani that France remained committed to the 2015 nuclear agreement which, besides the United States, was also negotiated with Britain, China, Russia and Germany.

“A trip to Iran by the president, at the invitation of President Rouhani, has been considered,” the Elysee said, while the Iranian presidential website said the visit would happen next year.

Macron said the US decision “will not put an end to the Iranian nuclear accord and that together all the parties in France and its European partners will continue to meet their commitments.”

Rouhani assured Macron that Iran in turn “will continue to carry out its commitments” in the nuclear accord, the Elysee said.

The French leader added that it was also necessary to have a dialogue with Iran on other strategic issues including Tehran's ballistic missile programme and stability in the region.

Macron also spoke to Rouhani of his “wish to work with Iran for a lasting political solution to the Syrian crisis.” Tehran is a supporter of President Bashar al-Assad's regime.

Macron's visit to Iran would be the first by a French head of state or government since 1971. French Foreign Minister Jean-Yves Le Drian is set to travel to the Islamic Republic in the next few weeks.

Earlier Friday the leaders of France, Germany and Britain issued a joint statement saying they were “concerned” about Trump's decision while reiterating their commitment to the deal.