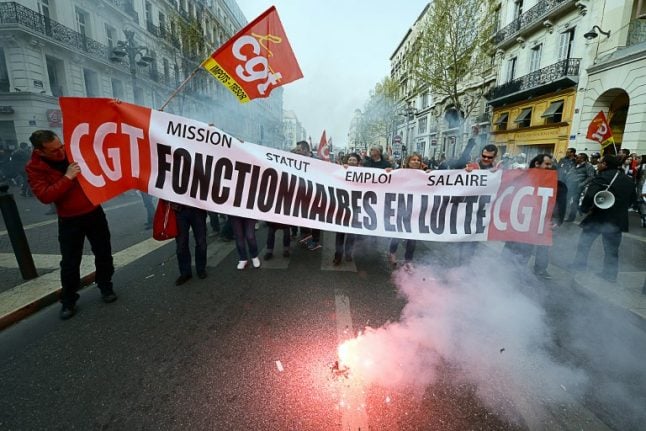 Photo: AFP
Fresh from pushing through major changes to French labour law, the 39-year-old centrist has now turned to the next stage of the “transformation” of the French social model which he has promised.
This includes major changes to France's generous unemployment benefits system, as well as large increases in state-funded training aimed at helping the unemployed back into the workplace.
Any change to social security is controversial in France and Macron is hoping to avoid an escalation in street protests against him which began in early September at the call of trade unions.
“It was polite but firm,” the head of the Communist-backed CGT trade union, Philippe Martinez, told reporters after talks with Macron at the presidential palace on Thursday.
READ ALSO: Martinez has been one of the most vocal critics of Macron since his election in May and the CGT has spearheaded what has so far been a mostly ineffective round of strikes and demonstrations to demand the government change tack.

Macron intends to deploy the same playbook used to push through the labour law reform: negotiations over the next few months culminating in a set of government's proposals.
“Objective: to invent new protections,” Macron tweeted.
But whereas his opponents were previously divided — with the more moderate CFDT and FO unions backing talks, not protests — there are growing signs that the labour movement is preparing to push back together.
Protection or precarity?
Macron vowed during campaigning to overhaul the unemployment benefits system to extend it to self-employed people and farmers who are currently not covered, as well as opening it up — under certain conditions — to people who quit their jobs.
But controversially he also proposed that benefits claimants could only refuse one job locally for which they were qualified. If they refused twice, they would lose their payouts or have to accept a government-approved re-training programme.
Funds set aside by the government for training are set to total 15 billion euros (18 billion dollars) over the next five years for adult education aimed at helping increase the skills of the jobless.
“The aim is to open up the unemployment benefits system to everyone and also to reform it to help fight against job precariousness,” said Labour Minister Muriel Penicaud, who will pilot talks in the months ahead.
Macron's popularity ratings have fallen sharply since his election in May, with only 40 percent of respondents in a recent survey saying they had a favourable view of the former investment banker.
Attempts to cut public spending and the public sector payroll led to a strike this week by civil servants, while local mayors and regional chiefs are also angry over plans to reduce their funding.
Macron also provoked leftist opponents with a proposed tax reform that will scrap wealth taxes on financial investments, leading him to be dubbed the “president of the rich”.