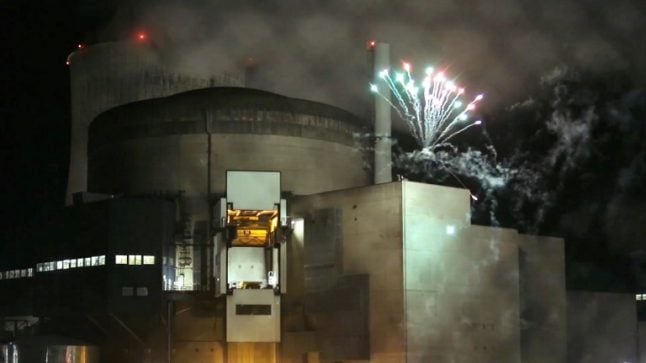 “Our activists launched a firework in the perimeter of a French nuclear plant. These installations are vulnerable,” the group said on Twitter, along with a video of the stunt at the plant in Cattenom, near the border with Luxembourg.

Shortly after the pre-dawn infiltration, the EDF energy company that operates the plant said the protesters were detained before they reached the nuclear zone, and that the plant's safety was not impacted.

EDF tweeted: “Greenpeace activists on site. Stopped by police. No access to the nuclear area. No impact on the safety of installations.”

Greenpeace said the fireworks were set off at the foot of a spent fuel pool (SFP) — where nuclear plants store highly radioactive fuel rods that are removed from reactors after their use.

Roger Spautz, a Greenpeace official in Luxembourg, said that at around 5:30 am (0330 GMT), about 15 activists entered the site and crossed two security barriers to reach the building containing the SFP. Spautz told AFP the action was aimed at drawing attention to the “fragility” of SFPs “that are not protected, unlike the reactor buildings”.

On Tuesday, Greenpeace warned about security shortcomings at French and Belgian nuclear plants that make them vulnerable to attack, citing an expert report commissioned by the group.

It stressed the “even more pronounced (dangers) in the case of spent fuel pools”, which are not encased in confinement buildings like reactors, despite containing hundreds of tonnes of highly radioactive fuel.

EDF immediately refuted the report, saying in a statement that its nuclear plants were “safe, properly monitored and very well protected” and that it was constantly evaluating their resistance to criminal acts or terrorism.

France has a total of 63 spent fuel pools at its 58 nuclear reactors, which provide 75 percent of the country's electricity.