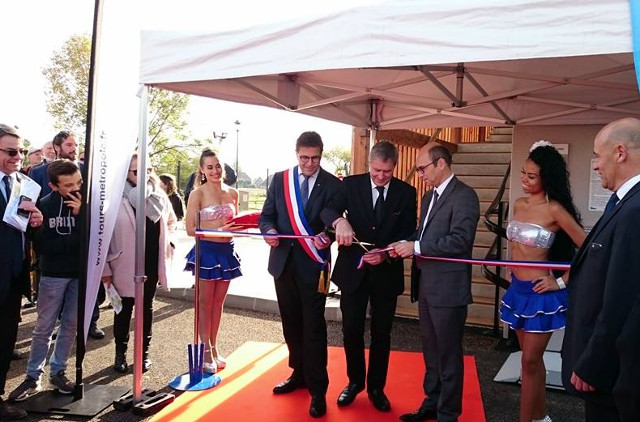 Photo: Tours Métropole/Facebook
We are used to the sight of scantily clad women presenting prizes at the Tour de France, but not at the official inauguration of water treatment plants.
But there they were, two scantily clad women paid to stand alongside two elected officials responsible for cutting the ribbon at the opening of the new water treatment plant in Luynes, near Tours in central France.
Standing alongside Philippe Briand, president of Tours Métropole Val de Loire, and Bertrand Ritouret, mayor of Luynes, the young women's attire at an event, that under normal circumstances would hardly have made news outside the local area, sparked outrage on social media and headlines on national news sites. When the photo of the event was posted on the Facebook page of Tours Métropole Val de Loire social media users reacted angrily accusing organisers of “casual sexism”.
“Shameful,” said one commenter. “Girls in skimpy clothing, was it really necessary?”
One angry commenter named Scarlett Smulkowski wrote: “Is it not a bit…too much, half naked cheerleaders in the middle of these old 'uncles' in ties?”
Another user wrote: “Two young girls/women? dressed up in lascivious clothing under the amused gaze of these big pigs with lots of money that doesn't belong to them.”
One Twitter user (see below) wrote: “Thank you for reminding us to do something each day to respect women.”

But the unwanted publicity prompted Philippe Briand the president of Tours Metropole to defend the presence and attire of the two women.
“Those who organised the inauguration invited all kinds of people including snake breeders, local actresses, musicians and a samba troupe. The two dancers were kind enough to take part and hold the ribbon so it could be cut.
“Everything went very well, everyone was very happy.”
Briand objected to the controversy and described it as a “non-story”.
“This wasn't Crazy Horse”, he said, referring to the famous Paris cabaret club.
READ ALSO: