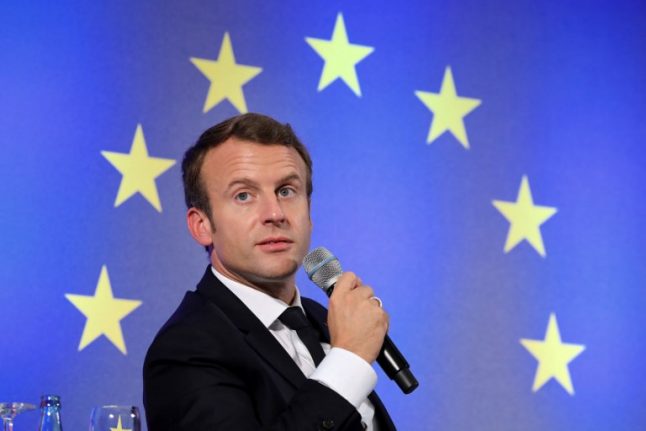 Photo: AFP
The hard-left France Unbowed party has demanded that the blue-and-yellow flag that has hung alongside the French flag in the lower house National Assembly for the past 10 years be taken down and replaced with the UN flag.
The party, whose leader Jean-Luc Melenchon ran a failed bid for president this year on an eurosceptic, anti-capitalist platform, argued that the assembly should ditch the EU banner because “it does not create consensus”
The proposal immediately received a thumbs up from the far-right National Front (FN), whose leader Marine Le Pen refused to take part in a television interview during the presidential campaign unless an EU banner on the set was removed.
“We are in the French National Assembly. By rights, there should only be the French flag,” FN vice-president Louis Aliot said.
But the suggestion was immediately rejected by pro-European mainstream parties.
Macron, an ardent defender of the EU who celebrated his May election victory to the strains of the EU anthem “Ode to Joy”, stepped into the fray on Tuesday.
The French leader announced he would sign an agreement officially recognising the union's flag at an EU summit next week — a move that would prevent it being removed from any public building.
Macron said his move was aimed at defending the EU “at a time when some in France are conducting debates where we turn in on ourselves and want to remove the European flag”.
Recognising the flag involves signing an annex to the Treaty of Lisbon which was negotiated in 2007.
Sixteen of the EU's 28 member countries have signed the declaration so far, but France has yet to do so.