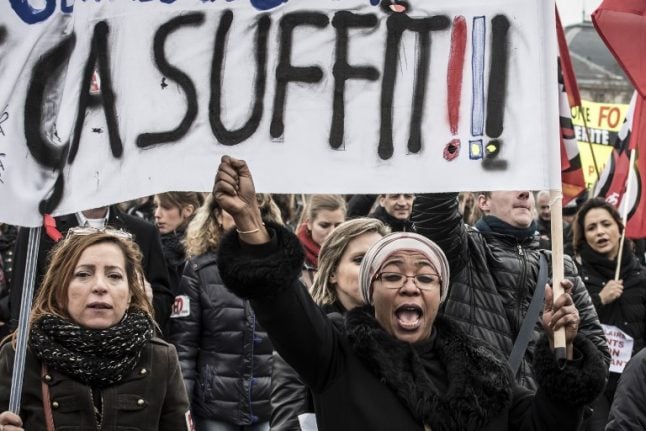 Nine unions representing 5.4 million French public workers have called for a day of nationwide strikes and demonstrations on Tuesday to show their “profound disagreement” with Macron's bid to transform the country's gargantuan public service.

This is the first time in a decade that all nine public-sector unions have issued a joint strike call.

Here are their chief complaints:

That sounds like a huge cut but there are currently around 5.4 million public sector workers in France – around one fifth of the active workforce.

Out of the 120,000 public service positions to disappear some 70,000 will be from around France’s local authorities and 50,000 from the central state. The cuts will be carried out by departing staff not being replaced rather than forced redundancies. Nevertheless it's a declaration of war by the government.

To make matters worse Macron’s government has decided to freeze the “index point” (point d’indice) which public service salaries are based on.

Essentially that means that civil servants won’t see their basic pay rise, which unions argue will see a dramatic loss of their spending power.

However the government points out that salaries can still rise through bonuses and promotions.

And to make matters even worse Macron’s government has decided to cut paid sick leave for public servants.

Currently private sector workers in France who are off sick have to go three days (jours de carence) before their salaries are covered by the social security, but in the public sector, workers do not lose any pay as it is covered from the first day they are off sick.

But to fight against absenteeism the government intends to reintroduce a measure first brought in in 2012 that will see public sector workers lose their pay for the first day of sick leave.

The government reminded unions this week that when it was brought in in 2012 the “jour de carence” saw a 43 percent drop in one day sick leaves among public service workers.

Surely it can’t get any worse? Yep on top of those gripes mentioned above there is another reason why public sector workers will down tools on Tuesday.

In the 2018 budget the government announced it would hike the CSG social charge, a levy deducted from salaries that goes towards paying for France's social security system, by 1.7 percentage points.

The government insists they will be compensated in a different way but has not made it clear how. Discussions are ongoing.

So add all that up, it explains why for the first time in ten years all of France’s unions representing the public sector are calling on worker to down tools.

To rub salt into their wounds, all these actions come after Macron’s pledge to public sector workers during his election campaign in April: “I will increase your spending power in the same way I will do for private sector workers”.

Laurent Berger, head of the CFDT, France's second-biggest union, told Les Echos business daily: “The government does not seem to have taken the full measure of the deep malaise among civil servants.”

“They are suffering from being seen merely as a budgetary constraint and not as beneficial,” he said.

After giving Macron their backing in the presidential election “they feel they are being made to pay for the government's policies”, Dabi told AFP.