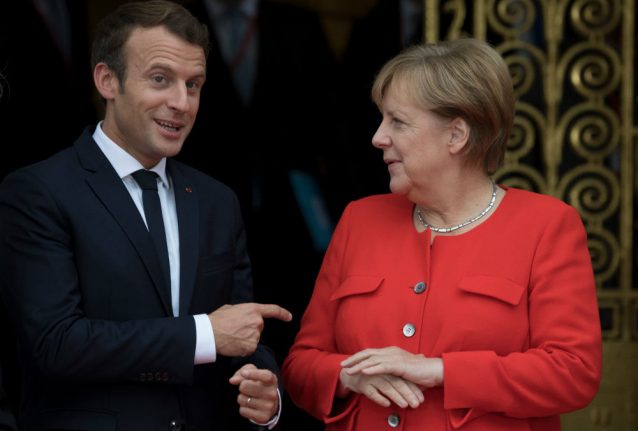 “If we are ready for common policies on security, digital infrastructure, energy, migration, the fight against terrorism, then who can explain to me why we can't have a common eurozone budget?” Macron said in an address to university students in Frankfurt, where he was due to open the annual book fair alongside Merkel.

The issue of a common eurozone budget is controversial in Germany, which fears it will lead to a pooling of national debt with Berlin picking up the tab for poorer member states.

Macron said he believed European leaders had “one year” to lay out their vision of the bloc's future in the run-up to the 2019 European Parliament elections.

“I think we need to start the debate, we have a year to clarify and draw up a common roadmap.

This is what I would like to come and do in Germany on several occasions and what I invite the chancellor to come to France and do as well, as well as other willing leaders,” Macron said.

Merkel has responded cautiously to Macron's grand vision for a more closely integrated Europe. In an interview set to appear in German media on Wednesday, she said she needed more time to study his proposals in detail, including his call for a eurozone finance minister.

She also reiterated Germany's stance on the debt issue. “With me, there will be no pooling of national debt,” she told the RND regional media group.

Macron's call for Merkel's backing comes as the chancellor is heading into thorny coalition talks with two smaller parties after winning a difficult victory in elections last month.

One of the potential allies, the pro-business Free Democratic Party (FDP) has expressed strong scepticism over Macron's plans, particularly his call for a eurozone budget.