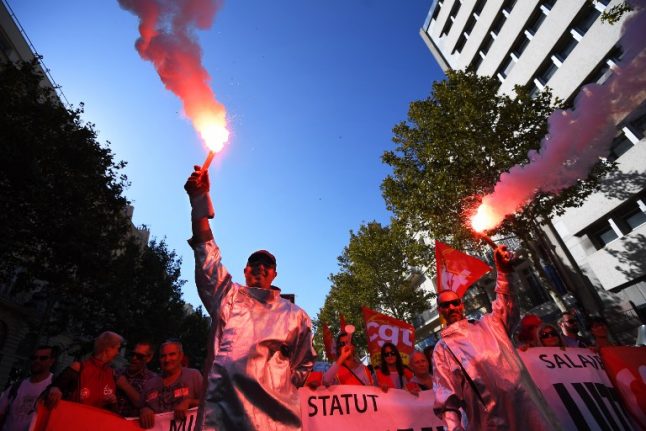 Endless holidays, a job for life, generous sick pay, the best pension packages… these are just some of the accusations laid at the feet of French civil servants, who were on strike on Tuesday.

So needless to say not everyone in France is sympathetic to the tens of thousands of striking civil servants, who marched on Tuesday in protest over pay freezes, changes to sick pay, tax hikes and job losses.

“Due to a magic, complex and illegible system of bonuses and rewards their spending power hasn’t stopped growing in recent years… where’s the scandal?” he asks.

“While the economic world is transforming at a high speed, the number of civil servant workers continues to climb relentlessly,” he said.

“Where’s the injustice?” the writer asks when comparing the government’s plan not to pay public sector workers if they have one day off sick whilst in the private sector the basic rule means workers off sick go without pay for the first THREE days.

Nicolas Beytout, director of L’Opinion magazine decried the “victim syndrome” and “denial of reality” among the French civil service.

“There has been 3.5 percent increase in the public sector wage bill. Who would dare compare this figure to the situation in the private sector,” Beytout asks. Some of the perks about working as a civil servant in France are unquestionable.

For example, a study this year revealed they were the champions of holidays.

French workers take an average of 33 days holiday a year, according to the ministry of labour study, but for civil servants that number shot up to 42 days on average. In the private sector the average amount of annual lave was 29 days.

It’s worth noting civil servants are often given extra days off for working overtime rather than being paid more, as they might be in the private sector.

And what about pay?

According to one report the average salary in the public sector was €2,477 in 2014, compared to €2,225 in the private sector. But it’s a little more complicated than that given the different categories of public servants in France.

What about jobs for life?

It has become slightly easier to fire civil servants in France in recent years. For example staff can be cut loose if they turn down three positions. According to Agnes Verdier-Molinié there’s no question civil servants in France have the better deal.

“When comparing two pensions after two identical careers in the public and private sector the cumulative gap over the average pension period is €60,000,” she told Le Parisien newspaper.

As mentioned above private sector workers are not paid for the first three days they are off sick (although some companies agree to cover the loss) but civil servants don’t lose out.

The government wants to change it so that the first day (jour de carence) is unpaid as it has been proved to dramatically cut absenteeism.

But what about civil servants themselves? Those marching in Paris on Tuesday were angered at suggestions they have it easy.

“To say we are privileged is an insult.,” Pierre Leve a teaching assistant told The Local. “I have no privileges or advantages just rights thanks to people fighting for them over the years.”

Franck Barrault who works for the RATP transport authority in Paris said: “They always come up with this debate to try and turn the private sector against the public sector because it makes it easier for them to impose cuts.

Secondary school teacher Christine Deseray added: “We are hardly privileged when it comes to salaries and indeed we have been under paid for years. People talk about the holidays but there's all the other work that we put in that they don't see.

“You have to go through rigorous tests to get into the French civil service and it takes years of study. You need to have skills and competences.”