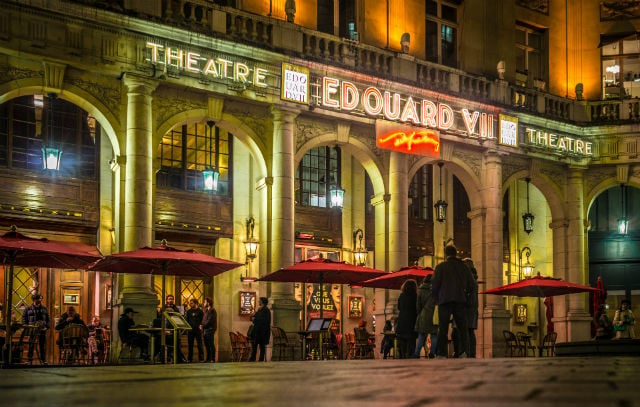 Photo: Theatre in Paris
One of the most overlooked, but best sources of entertainment for expats and tourists alike in Paris is the city's booming theatre scene.
While the French capital's so-called theatre district isn't a formally defined area, it extends all the way from Opéra up to the République Metro station.
Indeed it covers parts of the 8th, 9th, 10th and 11th arrondissements. Here Theatre In Paris, which has opened up the theatre scene to non-French speakers by providing subtitles for shows, spell out 10 places in the district that are really worth a visit.
Harry’s New York Bar Before catching a show, stop at this American style bistro quite literally from New York: the interior of the Manhattan bar was packed up and shipped over to the City of Light in the early 1900s.

As for its clientèle over the years, you might find yourself in the very seat where Coco Chanel or even Ernest Hemingway once relaxed. If you’re looking for ambiance, it’s ideal; the perfect ‘at home’ feeling for American expats, and an unmistakable sense of art and history à la Midnight in Paris. Do yourself a favour and try the Pimm’s Royal, you won’t regret it.

Built in honour of English King Edward the 7th, famous for his love for Paris (and French women), this venue has seen them all: Orson Welles, Eartha Kitt, Picasso, even Meryl Streep… it was built to celebrate Anglo-Franco friendship and showcase “Anglo-Saxon” cinema and theatre. It makes sense then, that English speakers can book shows here with English subtitles through www.theatreinparis.com. “Peacemaker” King Edward VII would be proud! If you’re an architecture buff, this is a must-see of the 9th arrondissement. Currently hosting Grease the Musical with English Subtitles this venue is slightly more modern, but just as jaw-dropping as some of the city's older buildings. Prestigious English ‘theatre architect’ Bertie Crewe designed this venue, along with numerous other breathtaking theatres all over Europe such as the Hoxton Hall, the Royal Hippodrome, the London Opera House (or the Stoll Theatre), and so many more. The Théâtre Mogador has always been dedicated to grandiose musical shows, such as Cats, Beauty and the Beast and Les Miserables. In a Napoleon III style boutique hotel designed by a student of Charles Garnier, who designed the Opera Garnier, is a luxurious perfume museum, featuring the scents of the Fragonard Perfume House.

For those who’ve hit just about every museum in Paris, this is a sweet alternative dedicated to pleasing two of the five senses, with its splendid decor and fragrances. The Perfume Museum will tell you how natural scents are mixed with fats and other substances to create the perfumes we wear today, and displays striking Lalique and Schiaparelli bottles, as well as Ancient Egyptian ointment flasks and porcelain scent bottles.

This is a venue where you’ll find a flock of young French artists and theatre lovers (and probably hipsters). The Théâtre Trévise is a late 19th century building in Paris’ 9th arrondissement which showcases French humorists and young talent. There’s a subtitled show now playing called I Love Piaf, which stars the Voice France star Karoline Rose, who embodies the French icon in a modern way.

An ideal blend of romance and culture: this museum tucked away in the 9th arrondissement of Paris is dedicated to arts. It has played host to the works of Chopin, Rousseau and Delacroix and it comes with a romantic, picturesque garden. Originally owned by Ary Scheffer, a prominent Dutch painter in the early 1800s who was close to King Louis Philippe I, the museum holds numerous collections from the romantic era, as well as memorabilia of novelist and memoirist George Sand, known for her literary prowess, her romantic side, and her affairs with Chopin and Musset. A theatre that owes its entire existence to one very audacious woman: Royal Theatre Director Mademoiselle Montasier, or Marguerite Bruno. Her auspicious troupe of actors was dismissed from the Palais Royal’s theatre (at the time called Les Variétés), supposedly in part due to a large debt she had acquired.
She obtained an audience, luckily, with Napoleon III himself, who rectified the situation, putting her troupe back in business and giving her a theatre of her own: today’s Théâtre des Variétés. The venue gained some fame in 1880 thanks to  Émile Zola's book “Nana”. Indeed, during the first few chapters of the book, the main character's rise to fame occurs in the Théâtre des Variétés. A lush theatre in the 10th arrondissement,  where the highest paid female performer of the Belle Epoque, Minstinguett, got her big break. The Théâtre Splendid was formerly a café théâtre.

Probably the most risqué hotel in the City of Lights, the Maison Souquet is a former Belle Epoque Brothel, and was restored into this original boutique hotel whose sexy side is accentuated with sensual art, a private bar, and mood lighting to get anyone feeling in the mood… This venue marks the end of the Paris entertainment district and was commissioned by Queen Marie Antoinette herself. It was also built in just two short months. Molière’s Tartuffe will soon be playing here, among many other French shows. (source)

While visitors to Paris might previously have declined a visit to a Parisian theatre in the past, the revolutionary surtitling at various venues in Paris’ entertainment district is changing that.

More and more shows with Theatre in Paris are being surtitled, and therefore made accessible to Anglophone art lovers visiting or living in the City of Light.