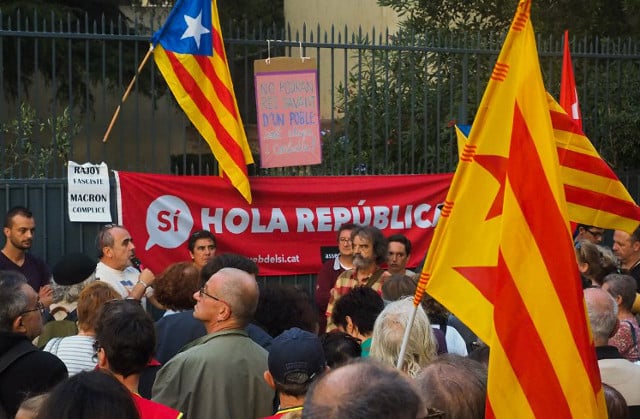 AFP
Pressure has mounted on Catalan president Carles Puigdemont to back down after hundreds of thousands of protesters last week rallied to defend national unity.
“If there were a declaration of independence it would be unilateral and it wouldn't be recognised,” Nathalie Loiseau said on CNews digital news channel.
“This crisis needs to be resolved through dialogue at all levels of Spanish politics,” she urged.
READ ALSO: Some 300 people demonstrate with Catalan pro-independence 'estelada' flags in front of the Spanish Consulate in Perpignan in France. Photo: AFP
The minister also reiterated Brussels' warning that an independent Catalonia would “automatically” be out of the EU and have to reapply to join.
“We are allies and partners with Spain, and Spain is a major democracy, so we are not going to meddle in the internal affairs of Spain.”
She said Catalonia, which borders France, already has “considerable autonomy”.
Meanwhile, the French region of Pyrenees-Orientales — known to some as “Northern Catalonia” — is keeping an anxious eye on the crisis just across the border.
Taken over by France in the 17th century, many in this region nestled between the Pyrenees mountains and the Mediterranean retain close cultural links with Catalonia to the south.
“They have family ties, they go there on weekends,” said Jean-Luc Pujol, co-founder of the political party Yes To A Catalan Country, which pushes for greater autonomy in the French region.
However, separatists are “very much a minority” in the French region, said Pujol.
Url copied to clipboard!