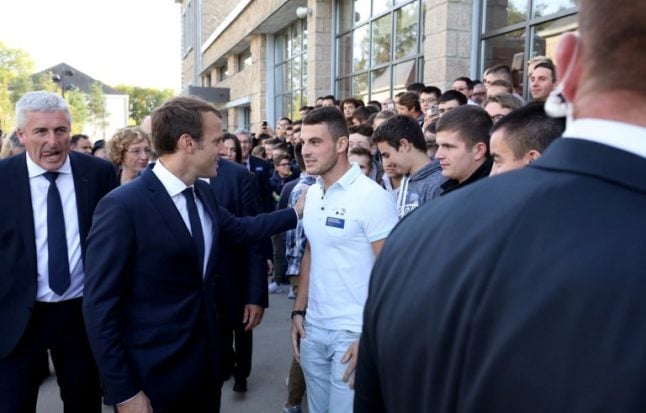 Macron's remark was aimed at workers at the threatened GM&S car parts plant who are battling to save their jobs.

As he was making a visit to a training centre in the Creuse department of central France the president was told that another local factory, located 150 kilometres away from the doomed GM&S plant, was looking to hire workers.

Macron responded: “There are some who’d be better off seeing if they could get a job there rather than “stirring up shit”.”

Some of the GM&S workers were protesting outside as Macron spoke. Their demonstration had degenerated into scuffles with riot police.

The remark, caught on camera was interpreted as being directed at striking workers at GM&S, whom The Local reported earlier this year had booby trapped their factory and threatened to blow it up. They had also started destroying the machinery there as they protested their anger at car makers Renault and Peugeot who they accused of blocking a take over of their factory and deliberately cutting orders.

Macron, who has been dubbed “the president of the rich” for pushing through tax cuts for France's most wealthy, immediately came under fire from opposition politicians and unions.

Many pointed out that Macron is now a repeat offender when it comes to showing “contempt” for working classes.

The 39-year-old president “doesn't know what it means to look for work,” said a lawmaker of the hard-left France Unbowed party, Adrien Quatennens.

“Macron does it again,” the Socialist Party said in a tweet, calling on Macron to “watch his language and respect the French people”. The conservative

Republicans party also voiced disapproval of his remarks.His list of offences is growing.

The president had drew criticism for once telling a man who had commented on his nicely tailored suit that the best way to afford his own suit was to work.

He also sparked ire when opening a new start-up hub in a converted railway depot he said: “A station is a place where we meet people who succeed and people who are nothing.”

There was his comment about “illiterate” workers at an abattoir and poor people who travel by bus.

And most recently the former investment banker gave ammunition to street protesters when he vowed he would not yield to the “lazy” in his battle to push through labour reforms.

Government spokesman Christophe Castaner defended Macron on Thursday, saying: “A president should be able… to use the words that we all use all the time.”

But Christophe Barbier, political analyst for BFM TV believes Macron's repeated offending is all part of a political strategy to appeal to the right and create a division with the far left of Jean-Luc Melenchon.

“Macron is not an idiot, said Barbier. “If he did it once he would correct himself… but if he does it repeatedly it's because he has a political objective.”