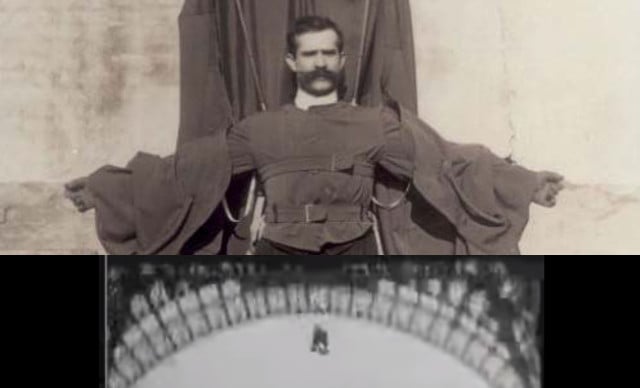 So – in short – what actually happened?

A man who designed a wearable parachute (or perhaps a wingsuit is a better term to use) jumped off the the first floor of the Eiffel Tower. His contraption failed to work and he died, two seconds later, on impact.

It happened in 1912 and was captured in a film that viewers may find distressing.

So who was the man?

His name was Franz Reichelt, he was born in 1879 in Austria, but he worked in Paris as a tailor. After his death, some referred to him as a “mad genius”.

So what went wrong?

Quite simply, the parachute or wingsuit didn’t open. The footage below shows the man jumping from the first level of the tower and not appearing to slow down at all before hitting the ground.

The problem, it appears, is that the suit was still at the testing phase but the jumper was convinced it would work – hence jumping himself rather than using a dummy.

See the footage here, but viewers may the end of the clip distressing:

Was there actually a working parachute?

If you’ve seen the footage above, you’ll notice that there’s no hint of a parachute opening at all.

But there was one there, a particularly large one according to the French press from the time, who had gathered to see the spectacle.

Reports said that the parachute was 9kg in weight, and up to 32 metres squared in fabric. All Reichelt had to do, reportedly, was open his arms and legs to make a big cross shape and the chute should have opened.

His intention was that if it worked his contraption, that was described as a bat suit, could be worn by airline pilots and used if their plane got into trouble.

Was the jumper mentally stable?

Apparently yes, and he was reportedly very determined to make the jump, even though just about everybody at the scene was trying to convince him otherwise.

Police officers, who had only given him permission to use a dummy in the jump, tried to stop him and his close friends tried to talk him out of it until the final moment.

He can be seen hesitating on the ledge and moving to jump on several occasions before leaning back. He finally decided to go for it.

But why didn’t he use a dummy?

There are whispers that he needed a publicity stunt to get sponsorship – and he had no time for dummies because his patent was soon to expire.

He had previously used dummies with his parachute – apparently successfully – but only from the fifth floor of a building. Never anywhere as high as the 57-metre drop from the lowest level of the Eiffel Tower.

So what happened after he hit the ground?

Reports suggest he died instantly, but he was still taken to hospital before he was legally declared as dead.

The footage above shows a man with a stick or a ruler apparently measuring the depth of the crater that the man left behind – a 15-centimetre hole.

The immediate reaction was one of a tragic experiment gone wrong, at least according to the papers from the next day.

Authorities banned people from jumping from the tower for experiments – although they still allowed dummies to be hurled off.

To this day, it’s still illegal to jump from the tower – but that hasn’t stopped daredevil base jumpers and bungee jumpers.

New Zealander AJ Hackett famously performed an illegal bungee jump from the tower in 1987 (see video below) and in 2005, a Norwegian man died during a publicity stunt jump for a clothing brand.