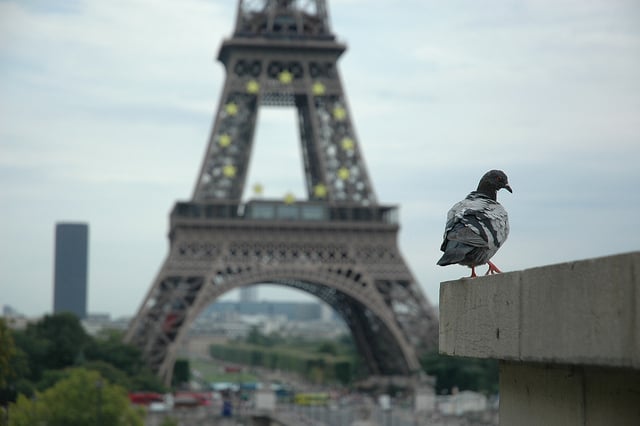 In news that may come as a surprise more than 17,000 people have put their signature to the online petition organised by pigeon supporters at the Ambassade des pigeons (Pigeon Embassy) and the bird protection charity Ligue pour la protection des oiseaux.

It came after Remy Féraud, mayor of the 10th arrondissement’s decided to bring in two hawks and three falcons to scare off Paris’s omnipresent pigeons from the Rue du Buisson Saint-Louis area.

The birds of prey are planned to work for the council over 10 days in October, with a demonstration of their abilities scheduled for last Saturday.

Their particular task is to try and disperse the unusually large concentration of pigeons wreaking havoc on the roofs and window ledges of social housing complexes in the 10th arrondissement on Rue du Buisson Saint-Louis (see map below).

“We tried traditional methods and now we are doing something more radical,” a spokesman for the town hall of the 10th arrondissement told The Local last month.
“Paris pigeons are not used to birds of prey,” he said, which the town hall hopes will make the plan a success.

“We are very strongly opposed to the measure,” Brigitte Marquet, president of the Ambassade des pigeons, told Le Parisien newspaper.

“It won’t solve the problem of regulating the number of pigeons in the city, but it will also be very expensive for taxpayers, and extremely cruel for the targeted birds,” she added.

It's not the first time the capital's residents have defended an animal considered a pest by many. After the city's authorities declared war on rats late last year, some 17,000 signed a petition titled “Stop the Genocide”.

The council believes the pigeons cause up to €150,000 in damage to the social housing in the area, and also carry diseases which can be transmitted to humans such as bird flu.

The cost of the operation is €12 800, officials said.
Merlyn, the firm based in the Pyrenees mountains that is providing the raptors, also supplies birds of prey to keep pigeons at bay for the annual Roland Garros tennis tournament in Paris.
Its says its birds all have “several years of experience” in scaring off unwanted creatures.
“The presence of our birds of prey causes insecurity for animal nuisances of all sorts (which will) naturally seek a safer place that is without danger,” it claims on its website.
READ ALSO: