The streets of Paris will be empty on Sunday as cars are banned from the entire city. That is, unless you're a taxi driver, tour bus operator, delivery driver, or well-behaving resident...

The anti-pollution initiative was given the green light by Anne Hidalgo, the Paris mayor, banning cars, motorcycles and mopeds from the city from 11am to 6pm on October 1st.

This marks the first time the whole of the French capital will be closed off to traffic – taking part in the global Car Free Day.

Pedestrians, cyclists, and rollerbladers will be the only people allowed to travel around the city (with the exception of workers and some residents – more on this later).

Only the Peripherique ring road and the main routes around the Bois de Boulogne and the Bois de Vincennes will remain open to traffic, as drivers are encouraged to ditch their polluting cars and enjoy the tranquil city instead. 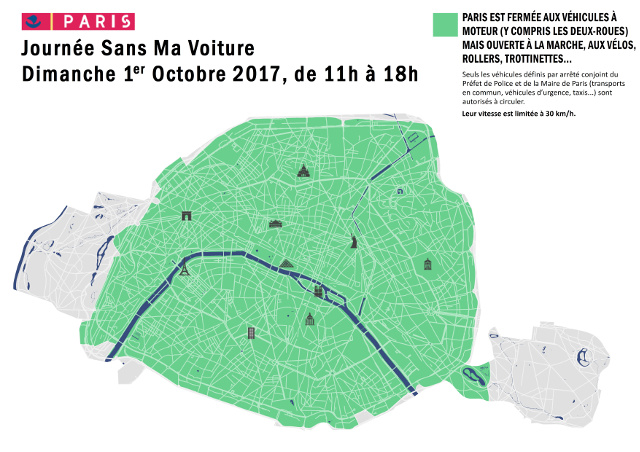 “It will be educational, fun, and congenial,” said Christophe Najdovski, deputy mayor responsible for transport.

However, there will be a few notable exceptions to the initiative.

Taxis, emergency service and delivery vehicles, and RATP public transport, will all be allowed to drive around Paris.

A 30km/h speed limit will be put in place for other vehicles permitted to drive around the city, including tourist buses, coaches, and any Paris residents with a proof of address who promise to take the quickest possible route.

Hidalgo has made it her mission to reduce pollution in the French capital, and earlier this year she pedestrianized the right bank of the river Seine.

Although Sunday will be the first time the whole of the city is closed off to traffic, there have been other attempts at closing Paris off from cars.

The famous Champs Elysées avenue that runs from the Arc de Triomphe to the Place de la Concorde is among the roads that are closed on the first Sunday of every month.

And the past two years have seen certain areas of Paris without traffic: in 2015, only the very heart of Paris went car-free, and last year the area was extended to stretch from the Champs-Elysées in the west to Père-Lachaise cemetery in the east and from the Sacre-Coeur in the north to Montparnasse tower in the south.

Mayor Hidalgo has also banned the most polluting cars from the streets of Paris, and plans to ban all diesel cars from the city’s roads by 2025.

Going car-free for the day will also help researchers uncover the effects of a day without traffic.

Air quality and noise monitoring organisations Airparif and Bruitparif will be on hand to note the changes.

Bruitparif has set up a special website to follow its results of noise testing throughout the day, while Airparif will release the air quality statistics at the end of the day.