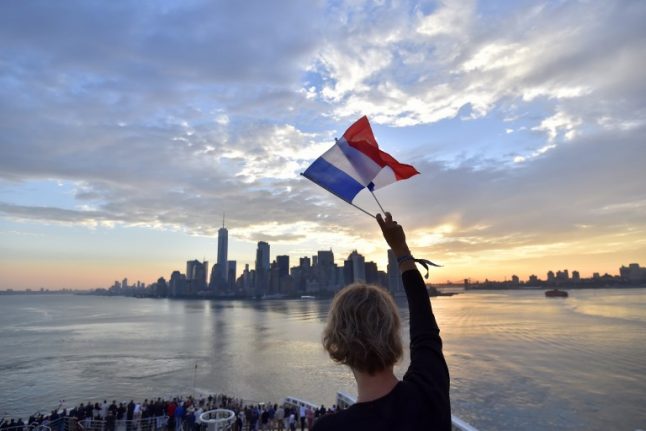 France is the ‘land of conquest’

During the French president’s trip to the United Nations in New York, he made an appearance in front of hundreds of French citizens who have made a new home for themselves in the US.

Standing in front of a huge French tricolore flag, Macron proudly told them France is now “the land of conquest”.

This follows an appearance in London prior to his election, where he called on the UK’s French population to return to their country and “innovate, seek, and teach”.

So why is Macron making such an effort to get French living abroad to come home?

“His efforts could be successful if there is a hard Brexit and French expats in the UK don’t feel safe,” he said. But it’s also part of a wider PR push from Macron to revamp France’s image as a country open for business – both on a global stage, and directly to its citizens abroad.

“Macron wants to promote France. Now his labour reforms have been passed, he hopes French expats will be able to come back home,” Seale added.

With 2.5 million French thought to be living abroad, Noémie Taylor-Rosner, a French reporter in Los Angeles, sees Macron’s appeal as a positive sign.

“It’s the first time a French president has actively asked French expats to return home, which shows he is a least aware of the French brain drain and willing to do something about it,” she said.

But Taylor-Rosner says Macron's appeal could have more influence persuading those French who have not yet left that they have a future at home than convince the departed to pack up and head back to France.

“His appeal might convince entrepreneurs who are still in France and who were thinking of leaving, to stay and invest at home,” she said.

But the French president’s efforts to overhaul the country’s image may be too late to appeal to expats in London.

Even with Brexit weighing on the minds of many French living in the UK, for many, their worries about Britain's departure from the EU are outweighed by the opportunities on offer in London.

The UK capital’s job market still appears to be a beacon of hope for younger French generations frustrated by the amount of qualifications they need to land their dream job in France.

“England’s job opportunities are much better than in France. I would never have been able to be a marketing director in France, but in England I sent in one application and I was hired,” said French expat in London Jérôme Blin.

Soon to be moving over to London, Frenchman Sébastien Charrier said: “The employment opportunities in London make me want to give it a go.

“In France, you have to have so many qualifications and so much work experience. In London, everyone has their chance.”

Other French expats who’d returned home from the UK told The Local they regretted the decision.

“I’ve just come back to France and it does nothing to help its fellow citizens. It’s a catastrophe to see how we’re treated when we return,” said Magali Teibog.

Another recently returned expat, Jane, said: “I came back home and I regret it. There’s too many hurdles, especially to get work. I should have stayed abroad and now I’m considering leaving again.”

Unfortunately for Macron, he cannot compete with the desire young French people have to head abroad to better their English and further their career in the UK.

Nevertheless, Macron’s appeal may have a little more success stateside as the one big factor French expats in the US take into account is Donald Trump.

“Expats in the US who return home during Macron’s term as president won’t be motivated by anything else apart from the blond man in the White House,” said New York resident Toni Mis.

US-based Frenchman Jean-Charles Boghossian, who has lived in New York says moving abroad is a personal decision for expats and they are unlikely to be influenced by a politician's call to return.

“We’re not sheep. Moving to another country is a big decision – and when you do, you plan to stay there for years. Political rhetoric won’t make people question whether they should move home,” said .

But the reality is that a speech in New York won't be enough to convince French abroad that their home country is changing. They will likely need to see hard evidence that Macron's reforms are working before they get on anyParis-bound plane.

Journalist and author Adam Plowright, who has recently published a book on Emmanuel Macron's rise said: “There's no doubt Macron is having an impact in making the French feel better about themselves and France but it would be wrong to suggest those abroad are going to come straight back just six months into his presidency.

“If that happens at all it will be a medium term trend.”

So it appears Macron is facing an uphill battle to persuade France's legions of expats that their home country is indeed now the land of conquest. But Macron knows all about how to win battles against the odds.