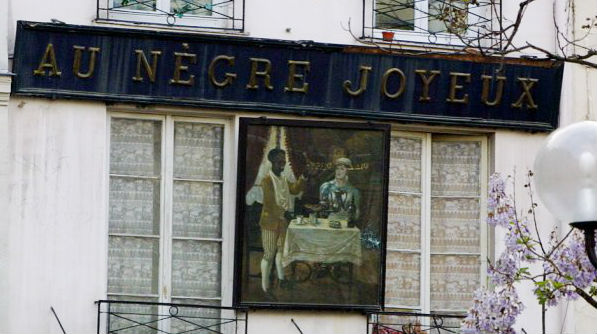 Down on the Left Bank of Paris, on the lively market street of Rue Mouffetard, you can still see a large sign that says in big letters: “The Happy Negro” (“Au Nègre Joyeux”).

Below the sign is a large image of a smiling black man at the service of an apparently high society white woman, who is sitting at a table.

The sign hangs above what was once a chocolate factory from the 18th century, which has long since closed. The sign has hung around as a reminder of France’s colonial past ever since.

But on Monday, the Paris council ruled that it was time to take down the image and the sign, after complaints from the Communist party that it was “insulting and offensive”.

The decision wasn’t an easy one for the council, in a topic that has proved divisive both now and in recent history.

Florence Berthout, the mayor of the 5th arrondissement where the sign hangs, was among those against removing the sign.

She told the LCI newspaper that while “slavery was an abomination”, the sign “marked both our historical continuity and the epoch itself”.

Deputy mayor Bruno Julliard voted in favour of taking down the sign, but had reservations.

“I don’t think it is in the interest of education if we erase these traces of history,” he said. “I think we must take a bet on the intelligence of our fellow citizens and that it is better to explain the traces of our history.”

“I don't think the best teaching method is to erase these traces and keep them in a museum.”

Julliard said historians and group representing the black community were also divided on whether the sign should come down.

The sign will be moved to the Carnavalet Museum, which showcases the history of Paris.

The Communists have also called for a new museum devoted to slavery.