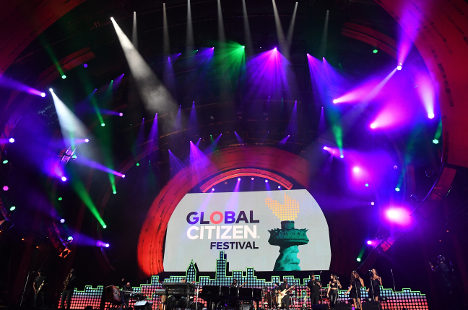 Macron made his pledge via video at the Global Citizen Festival in New York. Photo: Angela Weiss/AFP

The French leader made the pledge in a video to thousands of music fans at the Global Citizen Festival, a concert in New York's Central Park headlined by Stevie Wonder and Green Day that aims to build support for international development aid.

Macron said he was working with Senegal to boost the Global Partnership for Education which brings together donors, international organizations and the private sector to expand and improve schooling around the world.

Macron, whose video was introduced by Senegal's ambassador to the United Nations, Fode Seck, said France would co-host a financing conference for the partnership on February 8th in Dakar.

“It's all about education precisely to fight against terrorism, fundamentalism,” Macron said against the backdrop of the skyline in New York, where he spent the past week attending the UN General Assembly.

“It's all about education to help women to build their lives, to help people to have a decent life,” he said.

“I do believe we can deliver today and the momentum is now,” he said.

Macron said he would work ahead of the conference to help the partnership meet its goal of $3.1 billion in funding for 2018 through 2020, of which $2 billion has already been committed.

The group said that the money would assist in the education of 870 million children through assistance for schools in 89 developing countries.

Pop superstar Rihanna, who serves as an ambassador for the partnership, earlier met Macron in Paris.

Global Citizen, whose festival has taken place since 2012 on the sidelines of the UN meeting, hands out tickets for free to fans who commit to take action against poverty such as writing letters.

The latest festival comes as US President Donald Trump threatens sweeping cuts to foreign assistance as part of his “America First” foreign policy.