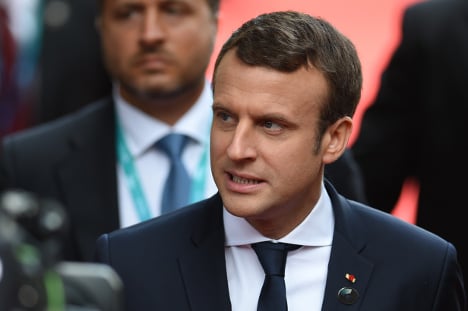 Macron enjoyed only the shortest of honeymoons after storming to power in May, with a series of communication and policy missteps blamed for a plunge in ratings to around 40 percent. That however improved to 45 percent this month, according to two surveys published on Sunday.

While poor results in Sunday's vote would do little to stop the 39-year-old centrist from governing, they could potentially complicate his plans to push through constitutional reforms.

Half of the seats in the upper house are up for grabs in the indirect election, in which only elected lawmakers – parliamentarians, mayors, local councillors – can vote.

And while Macron's Republic on the Move (Le Republique En Marche, or LREM) party enjoyed a remarkable rise – it won a landslide in the lower house in June, just 14 months after he founded it – it has lost some momentum since.

“The En Marche hurricane has not been at Category Five for a long time,” said Philippe Raynaud, political science professor at Pantheon-Assas university, riffing on the storms that have been buffeting the Caribbean
lately.

And three mass protests in a matter of weeks in Paris have drawn tens of thousands to the streets to demonstrate against Macron's proposed labour reforms.

But where LREM succeeded in smashing the decades-old dominance of the right and left in the lower house National Assembly, analysts predict the Senate, dominated by conservatives since 2014, will continue to lean to the right.

Macron's party counts 29 sitting senators, and has set modest goals for Sunday, when 171 out of 348 seats are up for election.

However, the indirect electoral system is unlikely to work in LREM's favour, observers say.

“En Marche is built on an almost direct link between Emmanuel Macron and the French people,” said Francois Miquet-Marty of consultancy Viavoice. “In the Senate elections, it doesn't work like that.”

A string of policy moves have particularly irked the lawmakers who will be voting, including some 300 million euros ($360 million) in funding cuts for local and regional authorities.

Others are unhappy about the decision to scrap property taxes for some 80 percent of French citizens, which previously went into the budgets of local administrations.

“The government has accumulated a series of gaffes and has done everything in its power to rub lawmakers up the wrong way,” complained Vincent Capo-Canellas, a centrist senator who is not part of LREM.

The Senate has the power to delay government bills, but in case of a deadlock the final say goes to the LREM-dominated Assembly – meaning a disappointing score Sunday would do little to stop Macron pushing through laws such as his promised economic reforms.

But they could complicate his plans to make changes to France's constitution by mid-2018, including cutting the number of seats in parliament by a third.

For that, Macron would need three-fifths of support of the two combined houses – 555 seats in total.

He currently has the backing of some 400 Assembly members – 313 from LREM – but would need to garner nearly 160 more from the Senate. As a last resort, however, he has said he would put the reforms to a referendum if necessary.

The Senate tends to take a backseat in the everyday rough-and-tumble of French politics, and with an average age of over 60, its members suffer a rather fusty image.

But some hope the upper house could gain more visibility during Macron's term.

Cedric Perrin, a senator from the rightwing Republicans, suggested LREM's dominance of the Assembly might foster a higher quality of debate in the upper house.

“The Senate will stay a creative force, with parliamentarians who are vigilant and experienced,” he said.