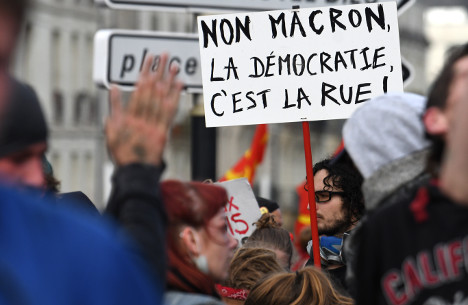 The third in a series of nationwide protests comes a day after Macron signed his signature reforms into law using a fast-tracked procedure that avoided a lengthy parliamentary debate.

Macron argues the changes – the cornerstone of his programme aimed at boosting entrepreneurship – will help bring down stubbornly high unemployment of 9.6 percent.

Melenchon's hard-left France Unbowed party has accused Macron of unravelling decades of hard-won social gains and called on people to come to Paris from across the country to try and force him to reverse his “social coup d'etat”.

The left has also come out swinging against Macron's plans to cut housing subsidies and reduce the scope of a wealth tax, claiming it as proof that the centrist is a closet right-winger.

'The battle of France'

France's youngest ever president has vowed not to be swayed.

“I believe in democracy but democracy is not the street,” the 39-year-old told CNN television last week.

Saturday's march will test continuing resistance to the measures.

On Thursday, some 132,000 people demonstrated across France, around half as many as protested a week earlier.

Addressing reporters at the Elysee Palace after signing five executive orders before television cameras Macron boasted that he had implemented his campaign pledge to shake up labour relations “in record time”.

The move to give bosses and workers more freedom to negotiate was “unprecedented” in French post-war history, he said.

Melenchon, a veteran 66-year-old political showman who placed fourth in this year's presidential election, cast it as an attack “on the last country in Europe that is holding out on its post-war social gains”.

“The battle of France has begun,” he said Thursday.

The measures chip into worker protections that have long been sacrosanct in France, frustrating reform-minded governments whether on the left or the right.

Three months of negotiations with union leaders produced a split between those willing to compromise — including the largest private-sector union, the CFDT – and those determined to fight the reforms, led by the country's largest union, the militant CGT.

The resistance has, however, been weaker than that faced by Macron's Socialist predecessor Francois Hollande last year over his changes to the labour code, which sparked months of sometimes violent protests.

The new reform comes as former investment banker Macron's approval ratings plunge, with recent polls showing that only around 40 percent of French voters are satisfied with his performance.

His characterisation of opponents of the labour changes as “slackers” has become a rallying cry, with protesters coining slogans such as “Slackers of the world, unite!”

Macron insists he has a mandate for change after his presidential win in May and his party's thumping parliamentary victory in June.

“Emmanuel Macron sees the election as a blank cheque to do what he wants…He has an authoritarian approach to power,” David Guiraud, France Unbowed's 24-year-old spokesman on youth issues, told AFP.

Public opinion is divided, according to a recent BVA poll, with most respondents saying they think the reform will boost France's competitiveness but fail to improve conditions for workers.

Philippe Braud, professor emeritus at Paris's Sciences Po university, said he believed popularity was not a concern for Macron.

“He knows he won't be defeated in the street,” Braud told AFP.