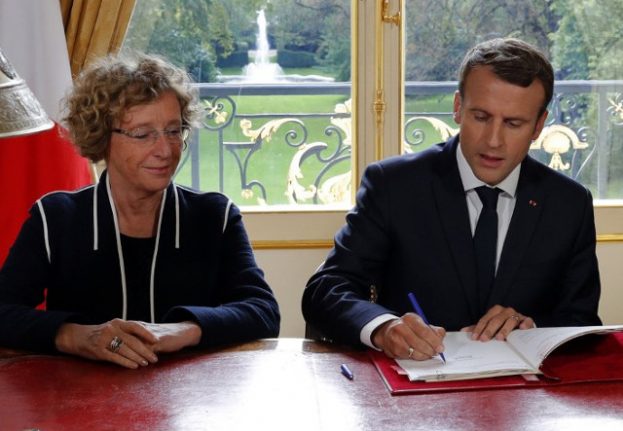 AFP
“The reform… constitutes an unprecedented transformation of our social model (and) the economic functioning of our country,” the 39-year-old Macron said, adding that it had been “carried out in record time”.
The measures, which have triggered mass protests, are designed to give employers more flexibility to negotiate pay and conditions with their workers and makes it easier to lay off staff.
Macron signed the reform, contained in five executive orders, seated at his desk in the Elysee Palace before television cameras in a US-inspired novelty for a French president.
The overhaul, eagerly awaited by the business community and France's EU partners, was fast-tracked via executive orders as a way of avoiding a prolonged battle in the streets.
READ ALSO: AFP
The measures chip into worker protections that have long been sacrosanct in France, frustrating reform-minded governments whether on the left or the right.
But Macron insisted Friday that the reform contained “new rights and new protections”, such as a provision for higher payouts to workers made redundant.
Three months of negotiations with union leaders pointed up a split between those willing to compromise — the CFDT and FO — and those determined to fight the reforms, led by the largest and most militant union, the CGT.
But the resistance has been far weaker than that faced by Macron's Socialist predecessor Francois Hollande over his changes to the labour code, which sparked a wave of sometimes violent protests last year. On Thursday, some 132,000 people demonstrated across France, just over half the numbers who took part last week in the first major street protests organised by trade unions since the centrist Macron was elected in May.
The Macron team insists that the reforms will encourage hiring and will offer the best cure to France's stubbornly high unemployment rate, which stands at 9.5 percent, roughly twice the levels in Britain or Germany.
Public opinion is divided, according to a recent BVA poll, with most respondents saying they think the reforms will boost France's competitiveness but fail to improve employees' working conditions.
Critics see the use of executive orders as reinforcing perceptions of Macron as a monarchical or even “pharaonic” leader.
But Macron insists he has a mandate for change after sweeping the board in presidential and parliamentary elections in May and June.
“Democracy does not happen in the street,” Macron said in New York on Wednesday.