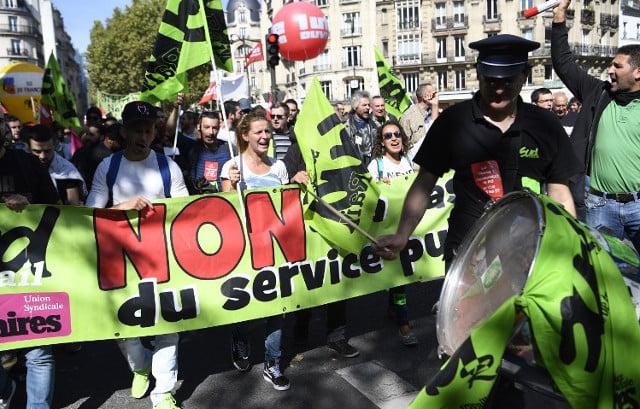 Protests in Paris on September 21st. AFP
The marches and strikes come a week after hundreds of thousands of people — 200,000 according to police, half a million according to organisers — demonstrated against the measures in the first major challenge to Macron since he was elected in May.
More rallies are expected Saturday, staged by hard-left political party France Unbowed, which will provide another measure of the resistance to 39-year-old Macron's pro-business agenda.
“This is only the beginning,” said leader of France Unbowed, Jean-Luc Melenchon, who came fourth in this year's presidential elections.
But despite Mélenchon's threat  the turn-out on Thursday suggested enthusiasm for the battle against Macron was dwindling. Police said some 16,000 people protested in Paris on Thursday, compared to 24,000 the week before.
While unions put the number at 55,000 it's still too few to put any kind of pressure on the president to change his mind at this late stage.

The Communist-backed CGT union has organised Thursday's protests and its secretary general, former car worker Philippe Martinez, called the first round last Tuesday “a good start”.
“What's important today and in the days and weeks ahead is that the movement gets bigger,” Martinez added.
READ ALSO: But Macron has insisted his government will not compromise on the reforms which make it easier for companies to hire and fire and were worked out during three months of negotiations with union leaders.
“Democracy does not happen in the street,” Macron said in New York on Wednesday, insisting he has a mandate for change after having swept the board in presidential and parliamentary elections in May and June.

Philippe Braud, a professor emeritus of Sciences Po university, said the government has the upper hand and that the protest movement in France “has been weakening for the past 10 years”.
“There's a sort of resignation among the French to reforms that are seen as necessary,” Braud told AFP, adding that their passage will be a “big victory for Macron”.
The president has also been boosted by splits in the labour movement, with the CFDT and FO unions so far declining to back the protests and strikes.

Disruption at companies and to public services was limited last week.
“When the unions, when the workers are divided, that is generally when the company owners win,” Martinez acknowledged Thursday as he called again for his counterparts to join in.
Fast-tracked changes
The labour changes, which are being fast-tracked via executive orders, are designed to give employers more flexibility to negotiate pay and conditions with their workers while reducing the costs of firing staff.
Public opinion is divided, according to a recent BVA poll, with most saying they think the reforms will boost France's competitiveness but fail to improve employees' working conditions.
Macron insists the reforms will encourage hiring, helping to bring down stubbornly high employment of 9.5 percent.
Once his cabinet approves the measures Friday, they are expected to be published in the official gazette and enter law.
The use of executive orders is a way to pass the measures quickly and avoid a prolonged battle in the streets — as seen last year when Macron's predecessor Francois Hollande made similar changes to labour law.
While the strategy may succeed in overhauling France's complex workplace regulations, some critics see the method as reinforcing perceptions of Macron as a monarchical leader.
Criticism of him as aloof and sometimes authoritarian have contributed to sharp falls in his popularity, with his approval rating languishing at 44 percent according to an Odoxa poll out on Monday.