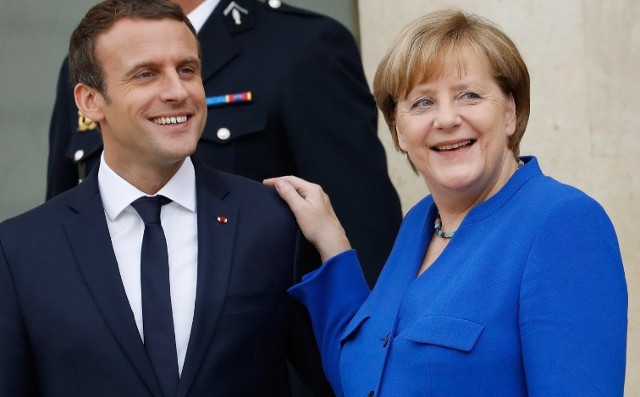 This weekend, he will discover who will be his partner in Berlin for what he hopes will be an ambitious — and French-led — dance routine.
The German election on Sunday is widely forecast to result in Chancellor Angela Merkel extending her 12 years in office, which would confirm her and Macron as the EU's uncontested power couple.
Macron has been using his tango metaphor — a variation on the usual description of the Franco-German “motor” which drives progress in the EU — since he worked as a senior advisor to ex-president Francois Hollande.
“If we want to dance the tango, we (in France) have to take the first step, given everything that's happened over the last 15 years,” Macron told an audience in Paris in March.
READ ALSO: In Macron's eyes, France has to win back the respect of German policymakers by carrying out long-delayed economic reforms: reducing public spending and making business-friendly changes to labour law, among others — reforms that Germany painfully began to enact in 2002.
In return, with France's credibility restored, he would be able to bank on German cooperation for his hugely ambitious agenda to “overhaul” Europe, including major institutional changes to the 19-member eurozone.
Since his election, Macron has gone out of his way to build ties with Merkel, visiting Berlin on his first foreign trip and naming a German-speaking prime minister.
The two leaders speak regularly, diplomats say, and the German cabinet held a warm joint meeting with their French counterparts in Paris in July.
'Sun King'?
But the hard work — and the contentious issues — have yet to be addressed and after several months of sizing each other up, the “Merk-ron” duo will soon begin talking in earnest if she is re-elected on Sunday.
“There is a willingness to work together, there's no question about it, but there are still differences, and even important differences,” Claire Demesmay from the German Council on Foreign Relations in Berlin told AFP.
Experts agree that the first stage of Macron's tango routine is essential: Merkel has worked with four French presidents during her time in office and is waiting to see if Macron will finally deliver on domestic reforms.
He appears determined, fast-tracking the labour law changes and raising hopes that France will reduce its public deficit next year to below 3 percent for the first time in 10 years.
French Prime Minister Edouard Philippe has spoken about breaking France's “addiction to debt” — music to the ears of Merkel and her conservative allies.
Yet Macron's vision for a reformed European Union looks likely to run into difficulties — with German cooperation over key parts of his vision far from assured.
His style — flamboyant, ambitious and never shy about presenting his vision for the future — has also antagonised some people close to the naturally cautious chancellor, who has grown used to being Europe's most powerful politician.
“Macron acts as if he's the Sun King, as if he has the God-given right to govern,” one source close to the German government recently commented to AFP on condition of anonymity. “That doesn't go down well with the Germans.”
Merkel has so far tentatively backed her French partner's idea of creating a new finance minister position for the eurozone, though the scope and responsibilities of the position are yet to be defined.
She has also backed the idea of giving the eurozone its own — fairly small — budget to help economically weaker members, but Macron wants it to be large and is counting on major German investment.
Macron's idea of the eurozone being able to borrow money collectively is also acutely sensitive in Germany, while his proposal for a eurozone parliament has few takers at present.
Much will depend on the results on Sunday and the composition of the ruling German coalition, which will emerge via negotiations between the different parties.
The continuation of the current right-left coalition of Merkel's conservative CDU/CSU and the left-leaning Social Democratic Party (SPD) would be welcomed in Paris, while an alliance with the pro-business liberal Free Democrats (FDP) could spell problems.
“If she allies with the liberals, I'm dead,” Le Monde newspaper recently quoted Macron as telling a visitor to the Elysee Palace.