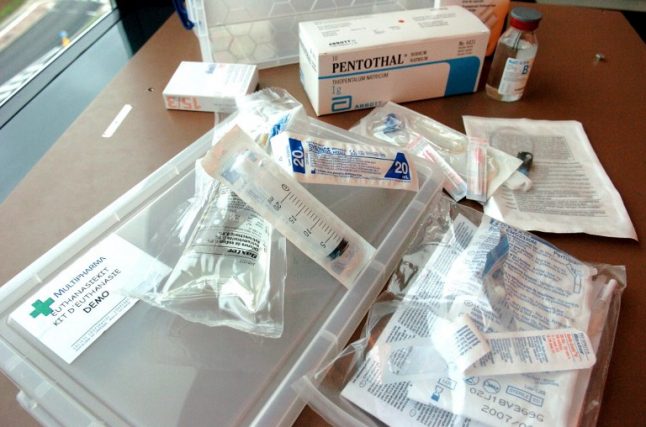 With the number of French people considering euthanasia as a viable way to end their daily suffering on the rise, the burden is largely falling on neighbouring Belgium.
While active euthanasia, by which a person deliberately causes the patient's death, remains illegal in France, the procedure became legal in Belgium 15 years ago.
Doctors over the border fear Frenchwoman Anne Bert's recent public announcement that she had successfully applied for assistance in Belgium to terminate her life, will spark a fresh spike in demand from France.

Unfortunately, despite Bert's application being approved, the process of being accepted isn't as simple as potential euthanasia patients might think, and for many it's downright impossible.
“Some patients think you can turn up at the hospital in the morning and have the procedure done by midday,” one Belgian doctor was reported as saying in the French media. “That's not at all how it works.”
As a result doctors have been forced to warn French patients of the pitfalls and obstacles that lie ahead in their quest for assisted suicide.
President of Belgian charity Mourir dans la Dignité, Jacqueline Herremans, is certain Bert's case will increase demand from abroad but doesn't want others to find false hope in her story.
Herremans told The Local that people who apply for euthanasia are expected to meet with the doctor who will potentially carry out the procedure several times.
These meetings have to take place over a period of months and the decision as to whether it goes ahead is completely up to them,
“In the case of Anne Bert it took months to build the file,” Herremans told The Local. “It makes it easier if the doctor knows about your life.”
“During the preceding months, the doctor will attempt to get to know the patients, as well as make sure that the request is voluntary, well-informed and without outside pressure.”
In the letter the organisation sends out to foreigners enquiring about euthanasia, Mourir dans la Dignité stipulates that : “A deep therapeutic relationship must have developed” between doctor and patient.
Of course there has to be a serious medical reason – an incurable disease. There also has to be unbearable suffering, usually both mental and physical, Herremans says.
“It depends on the will of the doctor. And that goes for Belgian citizens too,” she said.
But for people living abroad, the months-long process can be much more difficult to arrange, and the distance between doctor and patient can lead to people with certain kinds of illnesses being automatically disqualified.
This includes foreigners living abroad who suffer from psychotic disorders.
“The process for people with this kind of illness is so much more complicated and we have to be sure that all other options have been explored,” Herremans said.
Foreigners are told that “while residence in Belgium is not a condition to undergo euthanasia there, the “underlying philosophy” implies a minimum stay in the country, and/or several trips for various medical consultations since the therapeutic relationship should not be formed solely around the issue of euthanasia.”
But how many French people are looking to Belgium for euthanasia?
When it comes to the exact number of foreigners requesting the procedure, it can be difficult to tell but Herremans says she has seen a “definite” increase in demand from France.
However doctors are not obliged to reveal exact details on where their patients come from.
“I would say there are 6-10 requests per week from foreigners for sure. These are mostly from France but also from the UK and sometimes Germany.”
And as the number of requests goes up, Mourir dans la Dignité is still deciding how to respond.
“We have not decided which road to take. When you receive these kinds of letters it breaks your heart but we can't give everyone what they're hoping for,” Herremens said.
What's the law in France?
During Francois Hollande's leadership in March 2015, French MPs gave the green light to a controversial law that allowed medics to place terminally ill patients into a deep sleep until they die, a law which re-ignited the deeply divisive debate about euthanasia.
“Sleep before death to avoid suffering,” said MP Jean Leonetti, summing up the law he proposed.
During his 2017 presidential campaign, French President Emmanuel Macron didn't go into too much detail on his stance on euthanasia but said he was in favour of the law introduced by Hollande's government.
However in November 2016, a survey by pollsters Ifop showed that French people are overwhelmingly in favour (80 percent) of euthanasia itself as long as it's carried out by a doctor.
Url copied to clipboard!