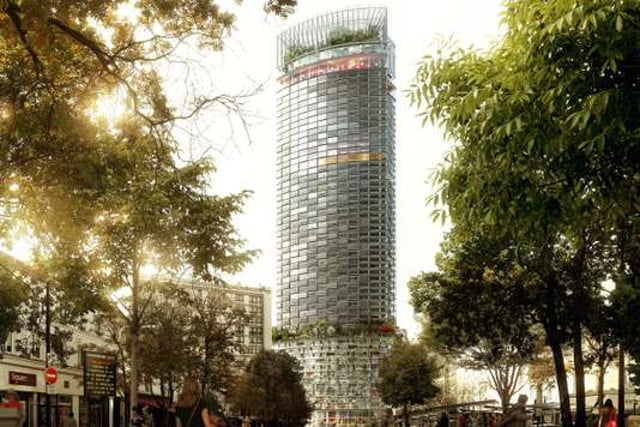 Photo: Nouvelle AOM
Montparnasse Tower has always been considered austere and vastly out of keeping with the city's largely Haussmannian appearance.
Indeed its owners have tried to market it by saying it offers the best view of Paris… because you can't actually see the tower itself.
But they hope a complete rejuvenation of the tower by 2023 will allow them to finally change their marketing strategy.
A group of three French architects' agencies, baptised 'Nouvelle AOM' for the purposes of the project, were announced on Tuesday as the winners of the bid to carry out the long-awaited revamp.
But the group doesn't intend on dragging the 58-floor modernist building into the past. Instead the €300 million makeover is aimed at bringing the much-hated tower kicking and screaming into the future.

The ambitious new plans include extending the building by 18 metres, giving it a new height of 227 metres in total, as well as adding several green areas that will include an urban agricultural space, a priority of the revamp.
The new tower will conserve ten times less energy and 70 percent of the ventilation will be provided naturally by wind.
But the developers aren't planning to throw out the baby with the bath water, instead the tower's characteristic shape will stay.
“When  we  took  up  the  challenge  of  this  exciting  competition,  our  focus  was  on  revealing  the beauty of the Tour Montparnasse from the inside out,” said Nouvelle AOM.
“We achieved this by incorporating radically new uses and crafting a complete sustainable 'green' makeover of the facade. The aim is to make the tower an icon of the 21st century energy revolution.” Photo: Nouvelle AOM
The development, set to be completed by 2023, will mark the 50th anniversary of the infamous building and is being funded entirely by the owners of the tower. Photo: Nouvelle AOM
The 6,000 people working there will be moved in the meantime, with the development set to create space for 6,000 more staff.
Url copied to clipboard!