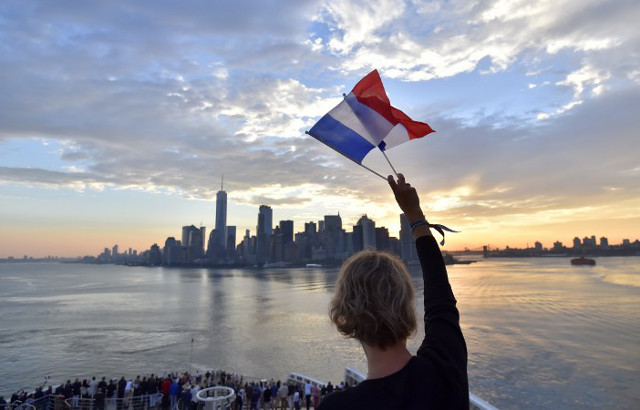 Macron gave a speech to hundreds of French expatriates in New York on Tuesday night telling them the times are changing and that France is now “the land of conquest”.

“Come back… the spirit of conquest flows again,” the president, standing in front of a huge French tricolore flag, told a crowd of several hundred French expats who had gathered at the famous Kaufmann Concert Hall.

Macron has long made it his ambition to persuade French expatriates, particularly the young entrepreneurs who have fled to the UK and the US in recent years, to return home.

France has seen a wave of young people move abroad, many to the US, where it is seen as easier to set up a business than in France, as well as further your career. French expats in America and Britain had voted heavily in favour of Macron in May's presidential election who were seduced by his vow “to pull France into the 21st century.”

In New York he vowed to restore France's pride of place in the global field.

“After Brexit, France will be the only EU power to be a member of the security council. All these transformations are underway,” said Macron.

The French president added that it was only by luck that France still held any influence on a global level.

“The place that France occupies in the concert of nations is almost a miracle today,” he said.

“Our contributions to the UN have nothing to do with our place in it. Our economic power is increasingly disconnected from it. For the French voice to be heard we must transform ourselves.”

Macron delivered a similar plea to French expatriates in London during his successful election campaign.

Addressing more than 2,000 French citizens and others at the Methodist Central Hall in February, Macron said he wanted to convince them to return and “innovate, seek, teach”.

“I want (France) to be a country where we can do all this,” the then centrist former economy minister said, addressing an audience including entrepreneurs and finance workers.

Britain is home to an estimated 300,000-plus French citizens, largely based in the capital.

“We must love success,” or risk French citizens looking elsewhere for opportunities, Macron said, referring to a “fear of failure” he sees in France.

It's yet to be seen whether French expats feel confident enough to hear his call, especially given that France could face months of protests over the president's planned labour reforms.

It's more likely that the election of Donald Trump and the UK's vote to leave the EU will have more sway in persuading French expats to return home, than any changes in France.