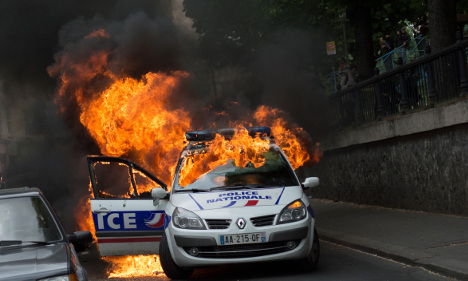 Nine anti-fascist activists, including an American national, appeared in courtl in Paris on Tuesday for a violent attack on French police that was captured in a shocking video that made headlines around the world.

Videos of the May 2016 assault, which have been viewed hundreds of thousands of times on YouTube, show youths dressed in black, most with their faces covered, surrounding the vehicle in the midst of traffic in the heart of the French capital.

The incident took place on a day when police held a demonstration in the French capital to highlight “anti-police hatred” that had risen up during labour reform protests that year.

On the same day anti-fascist militants staged their own march which flared into violence and a group of them attacked a police car on the Quai de Valmy in the 10th arrondissement.

A 27-year-old American was among the mob that smashed the windows of the police car before a lit flare was fired inside before police officers were forced to abandon the vehicle and flee.

The American admitted to smashing a metal post through the rear window of the vehicle. Prosecutors said he was unemployed and staying with friends, having arrived only recently in France. He was arrested at another Paris protest against the then government's labour reforms.

As the officers escaped one of them, named Kevin Philippy fended off an attack by a man wielding a stick, which earned him the name “Kung-fu Cop”.

As the mob came across the police car by chance one of them was heard shouting: “There's cops, come one, let's f**k them up” (Venez, on va les niquer).

A female officer, named Allison Barthelemy has told of how she thought was going to die.

The attackers, who included students and teaching assistants initially faced charges of attempted murder of a person holding public office but the charges were reclassified to “aggravated violence against police officers”.

They face up to 10 years in prison.

Two of the others on trial are brothers who are descendants of the famous French writer Georges Benarnos.

The trial is due to last all week, during which the numerous amateur videos of the attack will act as crucial evidence.

The head of the police Alliance union Jean-Claude Delgage has asked the court to send a “strong signal” with its verdict.