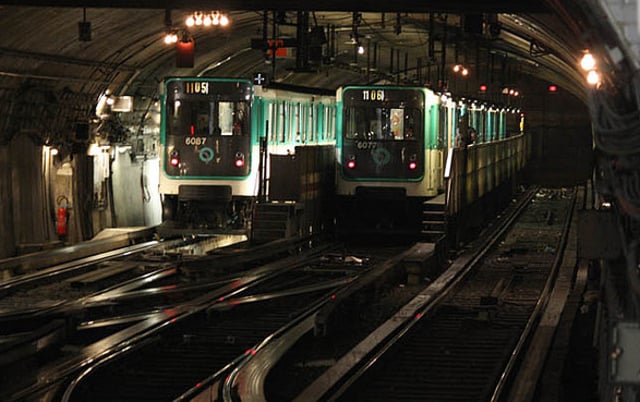 Paris Metro. Paul Roberts Photography/Flickr
As people living in Paris will know, taking a deep breath on the Metro isn't something to be recommended.
But what about those who spend all day working on the underground system?
Workers on the Paris Metro are trying to draw attention to the health risks involved in working on the city's underground public transport system as a result of the poor air quality.
The concentration of fine particles, that are considered dangerous to health, in the tunnels of the Metro and RER is nearly ten times that of outside, according to a report in Le Monde newspaper.
And a previous report on the air in the Paris Metro system said it was four times worse than the notoriously smoggy Péripherique ring road.
On Friday, around 60 members of the workers' CFDT union handed out pamphlets intended to catch the attention of the morning rush hour crowd at Gare du Nord with the words, “Breathing in the tunnels of the metro and RER seriously damages your health”.
“They're worried because it's their everyday lives. It's not just a question of health at work but also a question public health,” said Fabian Tosolini from the transport federation.
READ ALSO: Exposure to fine particles can cause short-term health effects such as eye, nose, throat and lung irritation, coughing, sneezing, runny nose and shortness of breath, and can also affect lung function and worsen medical conditions such as asthma and heart disease.
Nevertheless, according to their contracts staff can be exposed to fine particles at levels 100 times greater than the public.
And unsurprisingly, it's the 26,000 staff members who work in the underground tunnels in the greater Paris region of Ile-de-France who are at greatest risk.
“For the workers in the tunnels when they blow their nose, it's completely black, it's like they're working in the mines,” said Tolosini.
Public transport operator, RATP says it is doing what it can, and has been improving ventilation and modernising its installations.
“It's a scandal,” said Tosolini, adding that fine particles kill 4,800 people every year.
French national agency of food and health safety ANSES agrees.
In 2015, the agency said that Metro employees and those working on underground train stations are risking their health while at work.