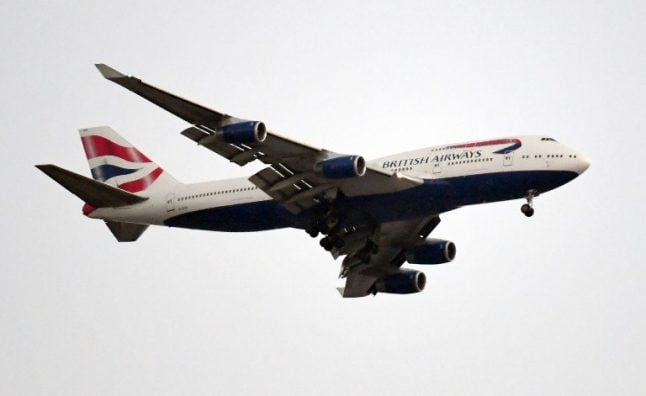 The British Airways flight eventually left four hours late. File photo: ETHAN MILLER / GETTY IMAGES NORTH AMERICA / AFP
A woman in her 50s has been taken into custody on suspicion of claiming that the Heathrow-bound plane, with 130  passengers onboard, was going to explode, a source close to the inquiry said.
She had been refused access to the plane because she did not have a valid ticket.
An airport source said the threat was made about 10 minutes before flight BA303 was due to take off, prompting the evacuation. Bomb disposal experts and sniffer dogs swept the aircraft, while passengers had to pass back through security, the source said.
Passenger James Anderson, a 20-year-old entrepreneur, wrote on Twitter that everyone onboard had been “individually searched by armed officers”, while police and fire vehicles surrounded the plane.
The airport's operator Aeroports de Paris said an incident “linked to security” had grounded the plane.
“There was an incident that led authorities to decide to keep the plane on the ground and to disembark the passengers a few minutes before take-off, to carry out additional checks,” the spokesman said.
The scare came after Britain raised its terror threat level to “critical” following the bombing of a London Underground train on Friday that left 30 people injured.
The flight was able to take off shortly before 12pm, more than four hours late.
British Airways said in a statement: “The safety and security of our customers and crew is always our top priority. We would never operate a flight unless it is safe to do so.”