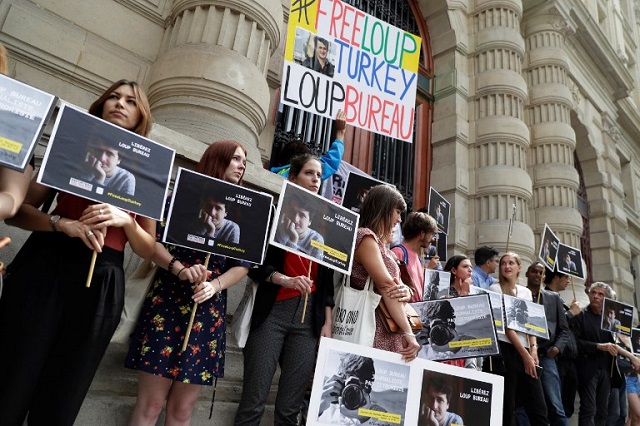 Bureau's lawyers said “we have the satisfaction to announce that he is being freed” while Christophe Deloire, of Reporters Without Borders, said on Twitter than Bureau's release was “imminent” and he would return to Paris on Saturday.

Speaking after talks with President Recep Tayyip Erdogan and his  Turkish counterpart Mevlut Cavusoglu, Le Drian also called for an improvement in the detention conditions of reporter Loup Bureau.

“We have asked for a procedure to be put in place rapidly so that our compatriot can return to France and his family,” he said at a press conference with Cavusoglu.

French President Emmanuel Macron had previously sought to secure the reporter's release in a phone call with Erdogan.

Bureau, a journalism student who has worked in the past with French channel TV5, was detained in late July at Habur border post in southeastern Sirnak province on the Iraqi-Turkish frontier.

He was charged with membership of the Kurdish People's Protection Units (YPG), a group Ankara says is a terrorist organisation. Washington, however, sees the group as the main force leading the fight against Islamic State jihadists on the ground in Syria.

His arrest has further hiked alarm over press freedom in Turkey under Erdogan, with foreign reporters also caught up in a massive crackdown following a failed coup in July 2016.

Turkey ranks 155 on the latest world press freedom index put together by Reporters Sans Frontieres (Reporters Without Borders), falling below Belarus and the Democratic Republic of Congo.

In June, Ankara released and deported French photojournalist Mathias Depardon who was held for a month on charges of supporting terror groups. He was also detained in Turkey's restive southeast.

Germany's Die Welt correspondent Deniz Yucel was imprisoned in February and has been personally accused by Erdogan of working as a “terror agent”.

According to the P24 press freedom website, there are 171 journalists behind bars in Turkey, most of whom were detained under the state of emergency imposed after last year's coup attempt.