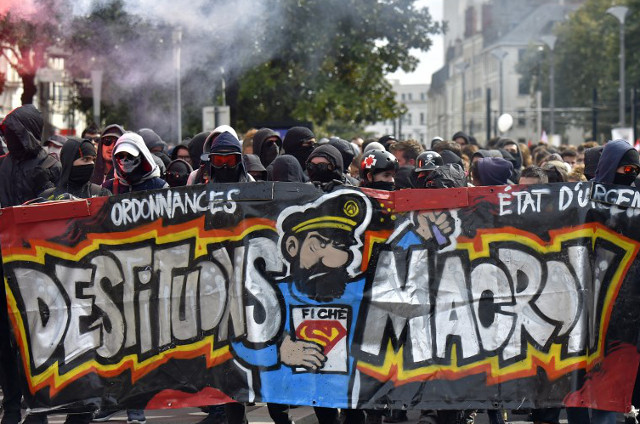 "Let's depose Macron" reads the sign held by protesters on Tuesday. AFP.
“It stems from a campaign promise made by Emmanuel Macron,” Work Minister Muriel Penicaud said, referring to changes aimed at giving companies more flexibility in hiring and firing.
“We are implementing the things that the French people asked us to do, so we're not going to back down,” she told BFM television.
Around 200,000 people according to police — 500,000 according to organisers — answered a call from the Communist-backed CGT trade union to strike and protest nationwide on Tuesday against Macron's proposals.
READ ALSO: The business-friendly 39-year-old wants to make France more attractive for both local companies and foreign investors who have long complained about restrictive workplace rules and the power of trade unions.
“The French people asked us to transform the country, they asked us to act,” Prime Minister Edouard Philippe told the France 2 channel.
“I know that the French people know perfectly well that our country is not in a healthy position.”
The new law will give small company bosses in particular more freedom to negotiate working conditions directly with their employees while capping compensation for fired workers.
Macron, elected in May, has angered unions by using executive orders to fast-track the changes and they are set to take effect by the end of September before being ratified by parliament in the coming months.
The changes “will help to lower mass unemployment,” Penicaud said, referring to a national jobless rate that stands at 9.5 percent — and double that level for young people and in deprived areas.
The turnout for Tuesday's protests was comparable to the first day of rallies last year against labour reforms under Macron's predecessor Francois Hollande.
French newspapers were divided on who had emerged strongest from the first round of what promises to be a lengthy battle between the government and the CGT, France's biggest and most militant trade union.
“Respectable turnout but not enough given the government's determination,” judged columnist Frederic Vezard in the Parisien newspaper.
Gaetan de Capele, a columnist in the right-leaning Figaro, said the “day of action against the labour reform was nothing like the wave of protest that had been promised”.
The editor of the left-leaning Liberation newspaper, Laurent Joffrin, saw neither side as victor, saying the head of the CGT Philippe Martinez had won but “Macron hasn't lost”.