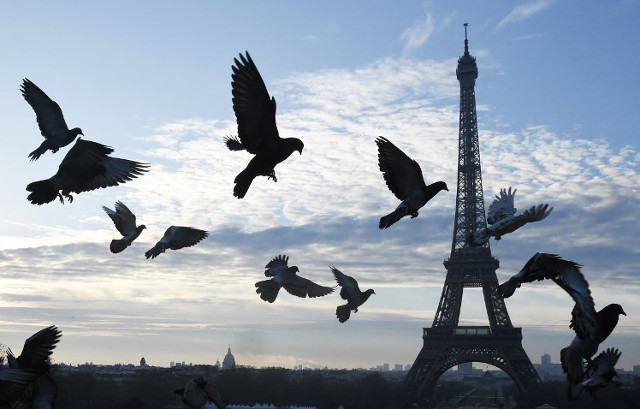 AFP
Three buzzards and two falcons will swoop in for 10 days in October to try and disperse the unusually large concentration of pigeons wreaking havoc on the roofs and window ledges of social housing complexes in the 10th arrondissement.
The area in question is around the Rue du Buisson Saint-Louis, whose residents are fed up with the constant presence of the birds which can also carry disease.
“We tried traditional methods and now we are doing something more radical,” a spokesman for the town hall of the 10th arrondissement told The Local.
“Paris pigeons are not used to birds of prey,” he said, which the town hall hopes will make the plan a success.
The plan is for the buzzards and the falcons to fly high over where the pigeons like to congregate and, by striking fear into their avian hearts, force them to move elsewhere.
READ ALSO: The company supplying the falcons also keep pigeons at bay during Roland Garros. AFP
So as not to frighten the human population, the raptors and their keepers will be presented at a public meeting in the local town hall on September 30th.
The birds of prey will then be unleashed at a later date. The cost of the operation is €12 800, officials said.
Merlyn, the firm based in the Pyrenees mountains that is providing the raptors, also supplies birds of prey to keep pigeons at bay for the annual Roland Garros tennis tournament in Paris.
Its says its birds all have “several years of experience” in scaring off unwanted creatures.
“The presence of our birds of prey causes insecurity for animal nuisances of all sorts (which will) naturally seek a safer place that is without danger,” it claims on its website.