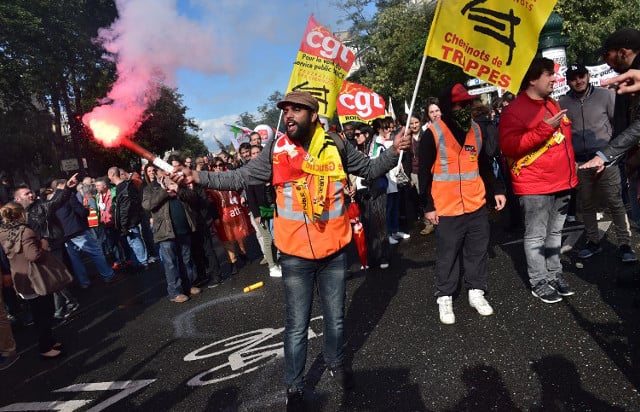 AFP
In a day of nationwide strikes and rallies that was seen as an important test for Macron – who has staked his presidency on overhauling France's sluggish economy – France's biggest trade union, the hardline CGT, was keen to show it could mobilise its supporters in large numbers.
On Tuesday evening the union reported that some 60,000 protesters had turned out in Paris, while the police put the figure at a more modest 24,000.
The numbers are being closely observed as they are considered an important indicator of the strength of resistance to the reforms.
Rail workers, students and public sector workers were among those who chose to voice their dissent.
“The big problem is the lack of security for employees. You never know what will happen at a company and how can you be expected to plan for the future if you're not safe?” public sector worker Patricia told The Local as he walked with the demonstrators in central Paris..
READ ALSO: Protests against labour reforms in Paris. Photo: Evie Burrows-Taylor
Jean, a Marxist ex-factory worker said: “The demonstration is about workers' rights but we also want to fundamentally change society. This is the petit-bourgeoisie and workers joining together to fight the power of finance and multi-nationals.”
“Francois Hollande was just like Macron except Macron's more open about the fact that he represents big business.”
While rail worker Christian explained to The Local that the changes were simply “unjust – designed to keep the poor in poverty and make the rich wealthier.”
During the demonstration, chants of “Macron, Macron, president of the rich. Macron, Macron, president of the bosses” could be heard in the streets.
Young and old alike were represented among the protesters with one young girl following the march wearing a sign that said, “When I'm older I'll vote for 'slackers' just like my parents,” referring to the recent controversial comments from Macron in which he dubbed opponents to his changes to the labour code, “lazy”.
Bruno Cautres of the Cevipof political research institute said the former investment banker had “added fuel to the fire” with his choice of words. Protesters aroud Gare d'Austerlitz in Paris. Photo: Evie Burrows-Taylor
“With the 'slackers' comment, there are all the ingredients for this to heat up,” he said.
The protest in Paris saw people march from Place de la Bastille to Place d'Italie in the 13th arrondissement.
As well as Paris, crowds of a few thousand people gathered in the cities of Nice, Marseille, Saint Nazaire, Toulouse and Caen.
The disruption to rail networks, air traffic control and public services appeared limited, however.
Nevertheless, the head of the CGT, Philippe Martinez said, “It's a first one and it looks like it's a success” at the start of a rally in Paris.
Changes to France's labour code
Macron, an ex-banker, wants to make France more attractive for both French companies and foreign investors who have long complained about restrictive labour laws and the power of trade unions.
He has vowed to press ahead with the reforms which aim to give companies more flexibility in negotiating terms and conditions with their employees while reducing the costs of firing workers.
He is also hoping to cut France's unemployment rate which remains at just over 9 percent.
But his political opponents aren't convinced that the president is going to get what he wants.
“What is going to be a surprise is when he (Macron) ends up giving ground,” far-left leader Jean-Luc Melenchon told reporters as he joined a protest in the southern port of Marseille.
“This country doesn't want the liberal world… France isn't Britain,” he added.
In addition to the CGT, the Solidaires union backs the protests, with leader Eric Beynel vowing that workers would keep up the pressure “until the orders are withdrawn”.
But other unions have signalled a willingness to compromise, and did not officially take part in the protests, including the Force Ouvriere (FO) union, though some of its branches defied orders and downed tools on Tuesday.
Fairground operators who joined in with Tuesday's protests were angry over pre-Macron reforms that open the industry to more competition.