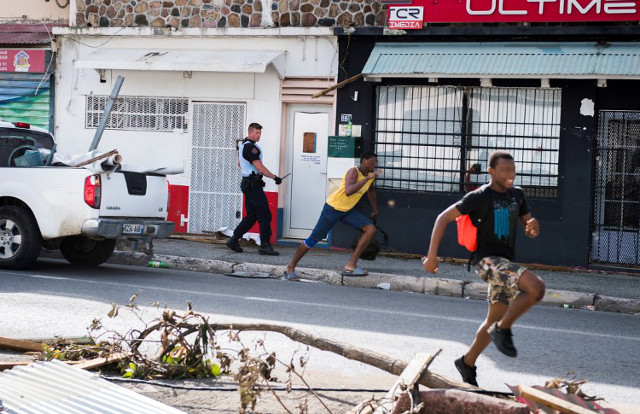 AFP
“For pity's sake, do something,” Estelle Kalton begs the police. “They're looting the shops.”
It is only by making a scene on the steps of a makeshift security centre set up in Marigot, the main town on the French side of the island, that Kalton is able to confront officials.
She gets an angry response to her charges of looting. “We know,” a police officer replies.
Minutes earlier, France's Minister for Overseas Territories Annick Girardin had walked down the same steps after assuring reporters that “there is now security” on the island.
READ ALSO: AFP
But officials and people in the streets seem to have different definitions of “security” and criticism of the state's response to the disaster is mounting on the island and in Paris.
“Police saw people trying to loot our store,” says Kalton's 57-year-old husband Philippe.
“Sometimes they're just 50 metres away, but they don't do anything.
“They told me that people's security is the priority and that the rest is only material, that it's not important.”
The shopkeeper moved to St Martin seven years ago. Before Irma, he and his wife enjoyed a sun-soaked life in a villa by the turquoise waters of Nettle Bay.
What remains of their house, metres from the beach, is visible from the steps of the security centre. Like the others, it is a wreck.
Now, the two clothing shops the couple ran on Liberty Street are “all we have left”.
'We'll shoot you'
Exhausted and angry, the Kaltons are watching over their shops as much as they can, and have asked a neighbour to do the same.
During the most recent break-in attempt, the neighbour scared away the looters with a machete.
“They said to him, 'If you stay here we'll come back, we'll shoot you and take what we want,” Philippe Kalton says, grim-faced.
Regional police chief Jean-Marc Descoux said some 500-600 local delinquents were likely responsible for most of the looting, taking advantage of the devastation for personal profit.
“But it is also people who are desperate, who are panicking and who have nothing left but misery,” he told the broadcaster France Info.
Paris is battling accusations that it was underprepared for the devastation in its Caribbean territories, with opposition leftwinger Jean-Luc Melenchon demanding a parliamentary inquiry into whether enough security forces were sent.
Fourteen people have been killed on the island, 10 on the French side and four on the Dutch, and many homes destroyed.
Along with some 85 tonnes of food, one million litres of water and 2,200 kilos of medicine, some 1,500 rescue workers, troops and security forces are on the ground on St Martin, a number set to rise shortly to 2,000.
But for many residents, it is not enough.
On the Dutch side of the island, too, there are complaints of looting and criticism of the official response.
“They reacted far too late. The French were much quicker on St Martin to evacuate people,” Kitty Algra, one of the first group of 55 Dutch tourists evacuated on a military flight to Curacao, told the Dutch newspaper AD.
“Immediately after the storm, people were walking around with baseball bats. That was more disappointing than the hurricane,” she added.
'Lootings every 10 minutes'
The storefronts in the centre of Marigot are testament to the paranoid atmosphere gripping the island.
Every shop has its metal shutters drawn. Some show signs of being forced open with crowbars.
On one corner, a clothing shop stands open to the elements, its windows smashed in. The mannequins have been stripped of their clothes; the coathangers are bare.
In the Bellevue commercial district to the south, two soldiers patrol between the warehouses.
“I'm stopping a looter every 10 minutes,” one of them says.
Inside what was once a food storeroom lies an enormous pile of junk. A half-eaten pot of chocolate spread sits on an empty stretch of looted shelves.
“The owner was planning to give everything away to residents,” the soldier says bitterly.
“I'm from the West Indes and the behaviour of people on this island makes me sick. Until they calm down it'll be difficult to distribute supplies.”
Neighbouring shops, selling toys and electronic goods, have been similarly ransacked.
“What's the point in making off with a giant teddy bear when you're struggling to find enough to eat?” rails Elena Baudry, a local resident.
And she fears the chaos won't end here.
“Now that the shops are empty, they're going to rob the houses,” she says.