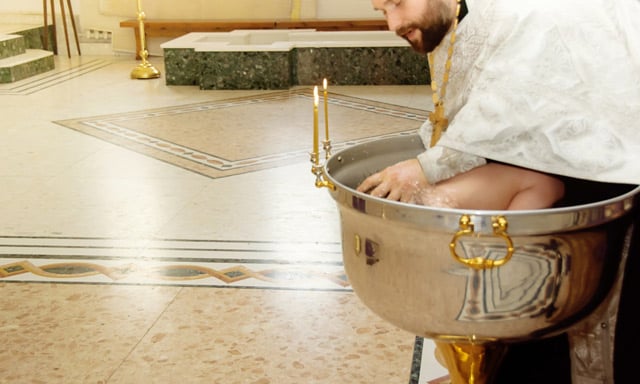 Don't worry, there was no baby in the font at the time. Photo:
A dozen tourists sniffed out the telltale signs of eau-de-vie, a clear fruit brandy, when they visited the church in Jura, eastern France, at the end of August.
“I made the sign of the cross and it smelt like eau-de-vie. Is this a local tradition?” the tourists asked officials at the nearby visitor centre.
The enquiries prompted the authorities to carry out an impromptu investigation.
“A litre of brandy had been poured into both of the fonts, you really smelt the alcohol when you walked into the church,” local tourism official Pauline Fisseau said.
The church is not regularly used for mass and the fonts are usually empty. The two fonts were immediately drained and cleaned before being filled with more traditional holy water ahead of a festival the following day.
The identity of the pranksters and their intentions remains unknown.
Village mayor Christian Vuillaume said it was “clearly a joke”.
“It made me laugh,” he said. “I think the people who did it had a sense of humour and wanted to break with tradition,” he said.
“But I don't think everyone was amused.”